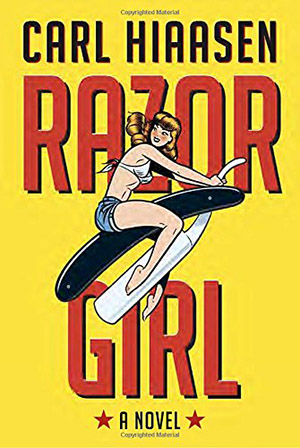 Carl Hiaasen’s latest Key West based caper starts with the title character, Razor Girl, rear-ending a visiting LA talent agent, Mr. Coolman, while shaving her private parts. The razor cutting is just a gimmick for this con-woman, whose real name is Merry “Christmas” Mansfield. The traffic bump results in her kidnapping Coolman, which in turns set this world on its head.

Razor Girl is a series of wild and unfortunate events that is farcical and for the most part delightful. Hiaasen’s gift for absurd satire is grounded in his odd details and delicious backstories. Think Elmore Leonard meets Tom Robbins meets rum and key limes.

The world Hiaasen creates is filled with characters and these are his strength. There is Buck Nance a “Duck Dynasty” style reality TV star who goes missing after resorting to a racist homophobic rant during a bombed comedy routine; Retired Detective Yancy whose relationship is on the fritz (he is a returning character previously introduced in Hiaasen Bad Monkey,); Merry Mansfield’s sleazy conman boyfriend Zeto, who drives a Tesla; A businessmen looking to make a profit by transporting sand from Cuba to Florida to combat beach erosion caused by global warming, along with a dozen other kooky characters.

The book jumps around between a few main plot lines concerning the players and, while they all are fairly satisfying, they mostly serve as a vehicle for Hiaasen to play and romp through his zany over the top Key West. The deeper you get into the book the more the ever-thickening plot complications and endless popular culture references seem to slow the narrative down. This is a typical length crime novel, coming in at 331 pages, but it ended up feeling like it dragged on a little too long. The ending a satisfying one, the comedy caper closes well, but it could have come much earlier.

Hiaasen’s Razor Girl is a sharp, and at times overreaching, read. It is a book that functions as great satire most of the time. This entertaining beachy read will satisfy fans who are looking to follow along on a wild romp through a fairly predictable, yet twisted, recognizable world.