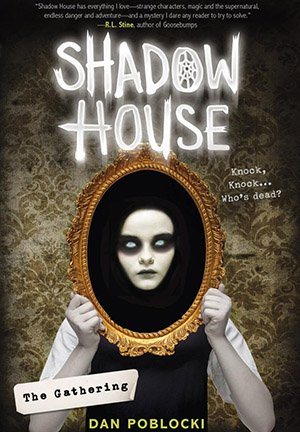 The Gathering (Shadow House, Book 1) is a wonderfully spooky title aimed at children aged 8-12. Five children received invitations to the Shadow House, but things immediately feel off when they discover they were all lured there for different reasons. Azumi believes she’s attending a fancy private school, Marcus thinks he’s attending a music school, Dash and Dylan are under the impression that they’ve been selected to play the heroes of a horror film, while Poppy received a letter from her aunt and will finally be able to escape the orphanage in which she grew up. Things quickly deteriorate and the children learn to their horror that they are trapped. The house holds dark secrets; secrets that the children must unravel if they are to have any hope of escape. The question remains, why did the house choose them and is escape even possible?

Nearly everything in The Gathering is designed to be a bit creepy, from the cover, the singed looking pages, to the artwork inside. It does a wonderful job building a sinister atmosphere, and though it plays with some tried and true tropes of the horror genre, it does so in a way that will lure readers in and leave them both fearing and anticipating the next page. There is also an app for smartphones or tablets that kids can download. The app contains a choose-your-own-adventure narrative, through which they can unlock backstories of various characters in the book.

One thing to keep in mind is that this is book one in a series, so readers who go in expecting to have things nicely wrapped up at the end will be severely disappointed. The book cuts off right in the middle of the children’s adventure, but book two is scheduled for late December, so readers won’t have too long to wait to continue the story.

This is not a book (or app) for the faint of heart, and may be too much for some children. However, for those who enjoy a good ghost story, The Gathering is a wonderful start to a promising, spooky series.