The Human Side of Science: Edison and Tesla, Watson and Crick and Other Personal Stories behind Science’s Big Ideas by Arthur W. Wiggins, Charles M. Wynn Sr., illustrated by Sidney Harris 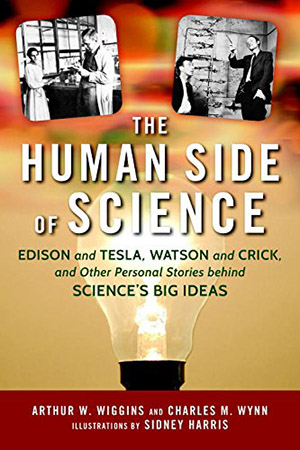 If you enjoy learning about science and in particular its history, but do not require the exquisite details of that science you very well may enjoy The Human Side of Science: Edison and Tesla, Watson and Crick and Other Personal Stories behind Science’s Big Ideas. The book is a joint effort by Arthur W. Wiggins, a Professor Emeritus of Physics, and Charles M. Wynn Sr., a Professor of Chemistry.

In the Preface they state their efforts have been “…to make science attractive and accessible…” and assert the concept of this book as being “people first, ideas second.” The book then begins with a very direct and understandable explanation of “Science’s Evaluation System” which should make it easy for anyone to understand what the scientific method is about and how it works.

There follows 14 chapters that feature major developments in the scientific world detailing the primary and secondary individuals involved, their histories, discoveries, errors, competition, and disputes. This manner of presentation allows one to see the evolution of the thought processes in these discoveries. It shows that often the name associated with the scientific development was only part of the ultimate outcome. During these presentations approximately 400 scientists and their interactions are mentioned and help flesh out the goings on during the pursuit of answers. Often these other individuals had very significant contributions of their own.

Individuals who are the main focus of the chapters include those involved in recent discoveries such as the identification of the human genome sequencing, determination of DNA sequence, nuclear fission, electricity, and if it should be DC or AC, calculus and motion, and the existence of atoms dating back to Aristotle and Democritus in the 300s BCE.

Perhaps one of the most important chapters is the introduction and the explanation and demonstration of the scientific method. If there is one thing to glean from the book it is: Observation, Hypothesis, Prediction, Experiment. This is followed by comparison of the result to the hypothesis. If they match (positive) the hypothesis is supported, but not proved, but if there is a non-match (negative) the hypothesis is compromised and must be altered or forsaken and retested with the new hypothesis. What a wonderful bit of knowledge and information for many of us to review and relearn, and something extremely important for the young to be taught, learn, and understand!