The Moral Vacuum by Martyn Gabe 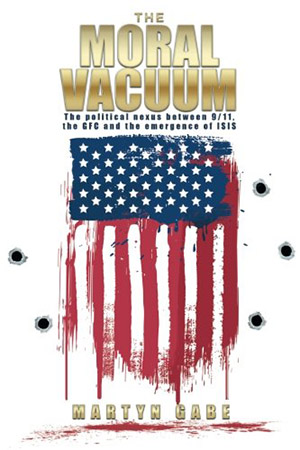 “Conspiracy theory” is a term that at once strikes fear and anxiety in the hearts of most every public figure, particularly journalists and academics. Since the 1960s the label has become a disciplinary device that has been overwhelmingly effective in defining certain events off limits to inquiry or debate. Especially in the United States raising legitimate questions about dubious official narratives destined to inform public opinion (and thereby public policy) is considered a major thought crime that must be cauterized from the public psyche at all costs. It was the Central Intelligence Agency that played the greatest role in effectively “weaponizing” the term. In the groundswell of public skepticism toward the Warren Commission’s findings on the assassination of President John F. Kennedy the CIA sent a detailed directive to all of its bureaus. Titled “Countering Criticism of the Warren Commission Report,” the dispatch played a definitive role in making the “conspiracy theory” term a weapon to be wielded against almost any individual or group calling the government’s increasingly clandestine programs and activities into question.

Such is the nature of the allegations made by Martyn Gabe in his book, The Moral Vacuum, which allegations are certainly not new nor outlandish. Indeed, many, if not most, have been given a great deal of credibility by many other writers. As his subtitle suggests, however, Gabe intends to go further, positing a “political nexus” between the so-called terrorist attacks on September 11, 2001 (ever since referred synecdochally as 9/11), the financial crisis of 2008, and the emergence of the terrorist group commonly referred to as ISIS.

The sub-title notwithstanding, Gabe goes through a veritable encyclopedia of issues, including the horrible condition of the U.S. prison system, problems with the theories of population growth, debates over climate change and marijuana legalization. The book is presented as a vitriolic polemic with excessive use of vernacular vocabulary. This, along with the glaring lack of sources (or, at the very least, a bibliography) tends to disminish the book’s credibility. Much of what Gabe addresses is not new; that is to say one could search online for articles, podcasts and videos discussing virtually every topic raised. That is not to say that there are not grains of truth in what Gabe argues; indeed, more like boulders of truth. The problem is that Gabe’s presentation is so scattered as to leave one adrift in a sea of polemical statements and often wondering what the central point is (one does not learn that the acronym “GFC,” despite its ubiquity in the book, means “global financial crisis” until p. 133).

That Gabe’s career included twenty-five years in the casino industry should not, ipso facto, diminish the validity of his arguments. His lack of some background, however, may explain the lack of depth with many of his arguments. His key conclusion, for example, is that “the” global financial crisis, like 9/11 was orchestrated by “political motivation,” and not “simply” by unchecked greed – as if the two were mutually exclusive. If the history of the United States shows us anything, it shows that concentration of wealth leads to concentration of power – in a very privileged few. This privileged few seeks to protect its power and wealth, thereby making avarice and “political motivation” two sides of the same coin.

Gabe argues that the seeds of the global financial crisis of 2008 were planted upon the election of Bill Clinton to the presidency and the passing of certain laws during his administration. This argument assumes, of course, that 2008 saw the only financial crash in the United States since the Great Depression. However, economic crashes of varying degrees were seen starting in the mid-seventies, as regulation slowly became dismantled. In the 1950s, the U.S. economy was based largely on production and manufacturing. Banks and financial institutions played a minor role and were highly regulated. The US saw no economic crashes during this period. By the 1970s this changed, as the role of speculative capital dramatically increased and the regulations separating commercial and financial banks were eliminated so that by 2007, financial institutions had forty percent of all corporate profits. The business of the U.S. economy was no longer manufacturing or production, but, business. Economic crashes became so common that the ratings agencies began to figure them into their calculations of the taxpayer bailout after the next crash, making loans to financial institutions cheaper. The concerted effort to concentrate wealth and power in the privileged few is further seen in the offshoring of production, deliberately creating insecurity in the labor market, as well as shifting of the tax burden from the wealthy to the poor. When the U.S. was largely a manufacturing economy, corporate barons had to be concerned that their employees had the income to buy their products. With the increasing financialization of the economy and offshoring of production creating insecurity, such concerns no longer became pressing.

Gabe’s understanding of the Middle East is similarly limited, believing the so-called “clash of civilizations” to have begun with the creation of ISIS. He only mentions the original leader if ISIS, Abu-Musab al-Zarqawi, but omits any discussion as to how he came to prominence. He mentions al-Zarqawi’s links to Osama bin Laden, but ignores the clash between the two, and that, but for the tragic short-sightedness of U.S. officials, would have been relegated to a mere footnote, never to have created ISIS. Nor does Gabe discuss how ISIS came to be led by the more powerful Abu Bakr al-Baghdadi, and the role of U.S. failures in Iraq after the deposing and killing of Saddam Hussein.

On a grander scale, however, Gabe misses the interrelated issues at different levels of analysis. The Middle East has been a stability shell game of the U.S. and Europe for decades. Why did the U.S. support the Shah of Iran until his overthrow in 1979? Why did the U.S. then support Iraq? Why has the U.S. continually supported the one country in the region perhaps most antithetical to perceived U.S. values of pluralism and democracy, to wit, Saudia Arabia? Why had two sworn enemies, Israel and Egypt, long been the largest recipients of U.S. military aid? The answers are not difficult.

Gabe glosses an answer by noting that government and big business have always “been in bed together.” Quite right, but he omits how this symbiotic relationship has been manifested in policy. Dwight Eisenhower warned shortly after leaving office about the coalescence of government and the private defense industry into what he termed a “military-industrial complex.” This growing monster is what has driven the U.S. into many a military disaster. The fall of the Soviet Union ended the public relations campaign, which focused on the specter of communism as the defense industry’s endless source of income. How could the defense industry continue its dominance? How could the government convince the public that not only did it need to be continuously militarily involved overseas, but militantly vigilant over its own citizens? The specter of terrorism has done more to justify the waste of billions of dollars, thousands of lives, and erosion of civil liberties than the threat of communism ever could have.

Gabe spends much of the first half of the book giving voice to the terrifying thought of a U.S. government intentionally killing its own people, but could have augmented his argument with examples from before “9/11.” Again, also helpful not only for the reader but in providing greater credibility, Gabe should have included a list of the many credible sources that have thoroughly documented the gross inaccuracies of the official narratives of what happened on that fateful day.

Martyn Gabe is angry, and he is right to be so. He has forced the reader to focus on what most Americans have chosen to ignore or refused to admit. That the book has shortcomings should not detract from the message. Indeed, the shortcomings can and should motivate the reader to become more informed.