The Other Side Of Him by Alice Rene 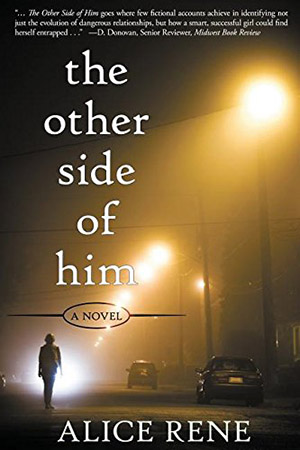 There is a scene that strikes me in Alice Rene’s The Other Side Of Him as being a larger representation of the novel itself. It starts when Tom and his sister Claire, both coming-of-age adults, return to visit their immigrant mother in San Francisco. Claire has returned for a brief respite from working as nurse at UC Hospital in San Francisco. Tom sells insurance over the phone. The three sit down to dinner and the talk turns to each of her children getting married. Claire has been seeing a young man named Greg but is reluctant to tell her mother, who she fears will pressure her about marriage. Tom is defensive of his younger sister Claire not being married, “You don’t want her to hurry and make a mistake like when you married papa”, Tom blurts out to his mother.

It’s a short time after World War II. But that doesn’t mean its effects have also vanished, as their mother replies quickly, “It wasn’t until later I found out he was a Nazi.” It’s how without hesitation their mother brings up the past and uses the word Nazi so freely – alittle too freely and without any hurt. She takes the next several moments to think about her words but it’s broken by Claire’s words, “…And thank god you had Tom.” It’s a wrong note, in a novel that misses its mark on basic levels and becomes a novel without subtlety. A stronger reaction to her son’s defense about her husband would have been, “I didn’t know who he was.” Or even silence, walking out of the room. A deep hurt. Some space between the lines where we can see Tom has gone too far and perhaps his mother is still working out her own past and her own husband. Instead, we have a reactionary and impulsive novel. The characters themselves feel flat – to the point where they seem to have only one or two reactions and little to no depth. To put it shortly it makes for a rather superficial novel where girls chase boys and marry young and call their mother mama and fathers papa.

We have Claire, who has deep desires and dreams beyond the walls which society has imposed, but she seems rather submissive to them. She does not marry when her mother likes, but it would have been far more interesting to have her rebelling. Instead, due to her circumstances she is a victim who cannot fight back. When she meets Greg he is a stereotypical gentleman. We are talking about a piece in time, but not one where I would believe human beings were so one dimensional. Greg picks her up, calls her in the morning, and plays the gentleman card akin to fairy-tales and poorly written romance. Things turn and we see The Other Side Of Him when one night, Greg goes too far and during a small get-together and forces himself on Claire against her will. He apologizes at a later time for being too forward and Claire is told her concerns are unfounded and that she should be lucky to draw the desire of a man like him.

This is the turn we get. It also just happens to be the reason for the title, The Other Side Of Him – a thinly veiled title to describe how one who seems perfect can turn and become the opposite of what we desire. Claire of course is a victim and part of circumstances beyond her control, and she seems defenseless to most of what happens to her in the book. For example, she is pushed around during her hospital course where she is in charge of a psychotic young girl. Everyone seems indifferent to her struggles and concerns.

But why? Claire seems like a smart enough character. Why not have her be a precursor to the raging 60s? A character of female liberation. The main plot makes for a rather thin and superficial affair. At times The Other Side of Him is flat out lazy. Consider conversations that switch with one line and nothing seems developed fully. It leaves a lot to be desired in a short and mostly forgettable novel. I imagine Alice Rene will have a solid following with her previous work Becoming Alice, but The Other Side Of Him is not a strong novel, or a strong story. Stronger novels with similar premises exist – although not fiction one thinks of The Stranger Beside Me, where Anne Rule not only tapped into the mind of Ted Bundy but also of the reader to show us how one charming, intelligent man who could also, in the same stroke, be a monster. The lesson is it starts with the reader; we create the horror with what is unsaid and unseen. The Other Side Of Him tells us too much and shows us very little in the minds of its far too simple cast of characters.