The Uncanny Valley by S.W. Campbell 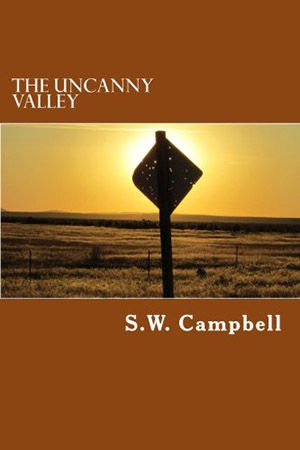 The Uncanny Valley, written by first time novelist Shawn Campbell, tells the story of a man on the run, while bringing his sanity and past into question. Paul is an average, middle-aged male, with a young wife and two daughters, who fixes friends’ cars for cash under the table – or so it would seem. After some shared discussions online, Paul forces his family to run away to Mexico, severing all ties to their previous lives, in fear that the government may be after them. The further they run, the more memories crop up in the back of Paul’s mind: his stint in jail, his previous family, his second wife’s struggle with drugs, his relationship with his father, a funeral, and so much more. As he claims the government is hot on his family’s trail, it’s up to the reader to decide if Paul is rapidly losing his mind in the Texas heat, or if his conspiracy might be unfolding itself right before his very eyes.

There is a lot that works well with The Uncanny Valley. For starters: the author’s voice. Campbell has a way of writing that makes his protagonist’s voice sound natural; as if the reader is witnessing an actual human being speak. Almost everything written feels true to the cadence of human speech. The book is filled with sentence repetition, which in the hands of another author might come off as annoying, but in this book it manages to also mimic speech, in that humans often talk in such a manner to better get a point across. Campbell’s characters, while maybe not all likeable, are endearing and interesting. The reader can’t help but root for a character, whether it’s Paul on his manic quest, or Lindsay who feels she’s quickly losing her husband.

What Campbell also does a tremendous job with is the time jumps throughout the entire text. Often, one chapter will be set in the present day, then followed by a chapter set eight or so years beforehand, followed by a third chapter set ten years earlier than that. Sometimes dreams or flashbacks are woven into chapters as well, almost seamlessly. At no point is there a year or a setting placed at the start of a new chapter to cue the reader in on where and when the segment takes place. Again, this is often a tactic that does an author in, leaving their audience confused and floundering. Campbell manages to set each chapter up in such a way that the reader instantly can tell where the chapter is set and when it falls on the timeline. This is no easy feat, and the fact that Campbell does so effortlessly is impressive, to say the least.

The downfall of The Uncanny Valley is that the author is quite ambitious with his number of characters and flashbacks – perhaps too ambitious, as not all of them pay off. Many of Paul’s flashbacks – such as his time in prison or his connection with Amy over the years – could have easily been expanded upon, giving the reader an even broader picture of this character’s history, while also having a bigger impact on the book’s end. There are also segments that drag and feel unnecessary to the overall plot, which would have been better left on the cutting room floor.

Readers would have benefited from more information on Paul’s creeping anxiety about the government. While throughout the memories and flashbacks his suspicions are sprinkled in, the reader is never given a full-fledged picture of what sets Paul over the edge, so the whole ordeal of him dragging his family from Texas to Mexico is a bit baffling. Each chapter starts with a fact of sorts that pertains to conspiracy theories, which makes the message a little too heavy handed. It’s almost as if Campbell is smacking the reader in the face with the fact that his book is about conspiracy theories; and yet, The Uncanny Valley focuses so little on the details of the actual conspiracy Paul is running from. It also makes the end of the book – is Paul crazy or in the right? – a bit of a mess. For the seasoned reader the answer is clear, but some might fumble with the clunkiness of the ending.

Nonetheless, for his first book, Campbell has put together a gripping story readers will enjoy. It is worth noting that the book contains profanity, descriptions of sex, drug and alcohol use, and some violence and abuse, so if any of that is not a reader’s cup of tea, they may wish to move on. Otherwise, many will enjoy The Uncanny Valley – and that’s no conspiracy, folks.