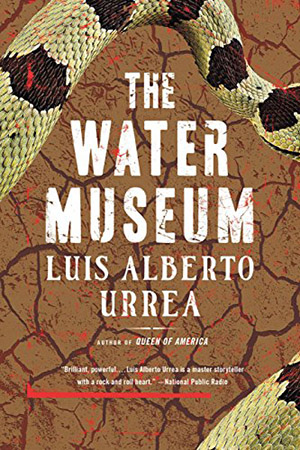 From the very beginning of this short story collection, the reader knows they will be going on a journey through a strange, yet somehow familiar, landscape, and that author Urrea is the right guide to take you there. The first story, “Mountains Without Number,” introduces us to Frankie, who runs a diner in an almost-ghost desert town, struck by a nameless tragedy. In few words of dialogue, we hear the chatter of her diner’s patrons, and as the story twists along with almost palpable suspense, we eventually learn what the numbers painted on the mountain represent, and why Frankie doesn’t like to look at number 77.

It only gets better from there. Luis Alberto Urrea has a finely honed sense of story, and is intimately familiar with the southwestern United States and its mix of cultures (and, in some of the stories, the Midwest). He has thoroughly lived it, sifted through his experiences for gems, and brought its treasures back to us. He describes the crowds at a San Diego beach on a weekend as “a vast roving fruit salad” in their swimsuits and athletic wear, then a few pages later describes a terrifying act of betrayal just as deftly. In these stories, you will feel the sand and sidewalks beneath your feet, stand beneath the vast skies and landscapes, and feel an Arizona summer so vividly you’ll sweat: “Phoenix always looks empty to me when it’s hot, like one of those sci-fi movies where all the people are dead and gone… the streets are too wide, and they reflect heat like a Teflon cooking pan. Pigeons might explode into flame just flying across the street to escape the melting city bus.”

The world of these stories contains great beauty, love, desire, family, noble actions; but also sleaze, violence, and just plain bad things happening to good (or at least morally neutral) people. It’s all presented unflinchingly, in wonderfully small details as well as wide, epic vistas. The Edgar Award-winning “Amapola” seduces us with teenage love, and then chills us to the core with the unexpected consequences of falling for a girl from a criminal family. The micro-short story “Carnations” manages to touch us in less than two pages with a gentle vignette of aging and grief. And “Taped to the Sky” is a wild, desperate road trip, the kind Hunter S. Thompson only wished he could write.

The pace lags slightly toward the end, especially in the bizarre war fever dream “Chametla,” but it quickly picks up again with the charming “The Sous-Chefs of Ioguä,” a comedic tale of competing immigrant-run restaurants in a small, corn-and-soybean town in Iowa. Then, in the eponymous “Welcome to the Water Museum,” Urrea blindsides us with a prediction of a plausible, near-apocalyptic, not at all distant future. It depicts a drought-stricken Midwest where schoolchildren are so unfamiliar with water that just a simulation of a rainstorm in the Water Museum induces panic. It’s an environmentalist parable, but it brings the issues down to a human scale, and it should be taught in all the schools.

There are authors who, when writing short fiction, pack on the sensationalism and try to gut their readers with a Twilight Zone-esque twist. Urrea occasionally falls into this trap, of horror for horror’s sake, but for the most part his thrills are not cheap. These thirteen stories are hard-edged, but full of unexpected life, and you’ll carry their memory with you long after the book is through.