Virtual Billions: The Genius, the Drug Lord, and the Ivy League Twins behind the Rise of Bitcoin by Eric Geissinger 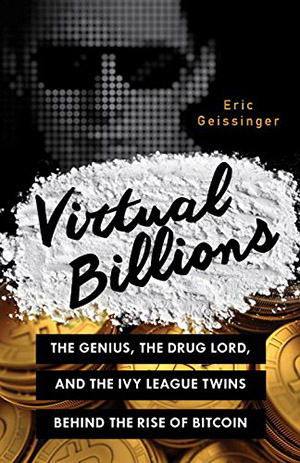 In Virtual Billions: The Genius, the Drug Lord, and the Ivy League Twins behind the Rise of Bitcoin, author Eric Geissinger touches on topics as wide-ranging as historical alternate currencies, complex computer algorithms, the finer points of libertarianism, undercover law enforcement operations, and the development of social media platforms – all in the service of a larger discussion of Bitcoin. Bitcoin is a digital currency; it exists entirely online, no government backs it, and – according to Geissinger – it’s a game-changer.

Virtual Billions tells the “story” of Bitcoin in three sections, each examining the life and influence of a major player in the currency’s creation, popularization, and stabilization: Satoshi, the mysterious creator of Bitcoin; Ross Ulbricht, the unlikely digital drug lord whose use of Bitcoin brought it into the public consciousness; and the Winklevoss twins, two rich kids who funneled their Facebook settlement millions into Bitcoin businesses. The first section provides an engaging introduction to both the concept and the creator of Bitcoin (though laypeople might do better to take Geissinger’s advice and skip the in-depth discussion of hash functions at the end of the second chapter). The second shifts gears into a true-crime thriller with Ross Ulbricht (AKA Dread Pirate Roberts) at the center, and while the story of the rise and fall of Silk Road is definitely intriguing, it pushes the Bitcoin discussion very much to the side.

It’s the third and final section where the book goes off the rails a bit. This appears to be Geissinger’s first full-length book, and while the research is thorough and the writing (mostly) successfully straddles the line between academic and conversational, it’s clear that the author lost steam as he struggled to make the most recent Bitcoin developments fit into the book’s structure. The discussion of the currency itself – and of its trials and tribulations as early adopters tried to stabilize the currency – is strong, but any and all discussion of the Winklevoss twins themselves comes across as fairly pointless and, frankly, a little bitchy.

That said, for readers interested in learning about Bitcoin – and a whole bunch of other stuff – Virtual Billions is definitely worth a read. It’s extremely informative without being overly dense, and it offers some real insights into where currency may be heading.