Women of the Qur’an: An Emancipatory Reading by Asma Lamrabet, translated by Myriam Francois-Cerrah 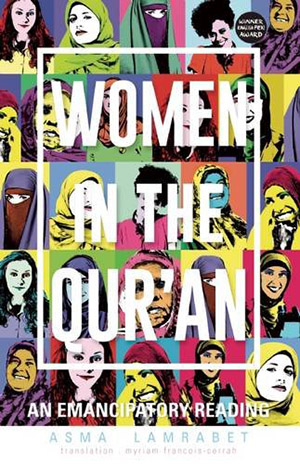 In this thin volume, Lamrabet, a Moroccan pathologist and activist, broaches the controversial issue of women and Islam. Key to her approach is that she does not merely address the “role” of Muslim women or how Muslim women are “perceived.” Lamrabet goes beyond the media headline issues to navigate the hazardous waters between the Scylla of Western paternalism and the Charybdis of “classical” Islamic scholars’ anachronism. She rails against the West’s notion of a “civilizing mission” to “free” women from Islam, correctly inferring the West’s linguistic hegemony as to what it means to be “free.” At the same time, she gives voice to the millions of (usually repressed) Muslim women, pointing out the contradiction between the Islam portrayed by certain (always male) Islamic scholars and what true Muslims believe to be the Islam as conveyed by the prophet Muhammad. Specifically, she blames “subjective human interpretation” made by classicist, traditionalist and patriarchal scholars, and translators for obfuscating the Qur’an’s essential humanist spirit.

What is important to be made clear is that Lamrabet infers throughout that her argument is not for a “novel,” “modern,” or any sort of “radical” “re”-interpretation of the Qur’an. Indeed, she argues, that were the verses of the Qur’an properly interpreted and lived, Muslim women would enjoy a status equal to that of men in every facet of every Islamic society, and would not be subject to the degrading treatment most suffer in many countries identified as “Muslim.”

To attempt her monumental task, Lamrabet goes to the source of Islam itself, the Qur’an. Lamrabet draws on the accounts of several women discussed in the Qur’an, such as Baklis (Queen of Sheeba), Maryam (Mary) and Umm Musa (mother of Moses). Lamrabet refuses to dwell on women first and foremost as mothers, which male classical Islamic scholars tend to do. For example, Lamrabet draws attention not to Maryam’s motherhood but to her “highly privileged spiritual station,” noting that God chose a woman rather than a man to be a symbolic link between Christians and Muslims.

Similarly, Lamrabet chronicles the lives of early Muslim women who stood up for their faith and connects their resistance to political struggle. She writes of early Muslim muhajiratun (political refugees) Summaya, Zanab, Umm Sharik and Umm Kulthum, noting their bravery, refusal to compromise, and willingness to sacrifice their lives for their faith. Such a view is in complete opposition to the modern portrayal of the Muslim woman as an oppressed victim unable to even raise her own voice.

Lamrabet discusses the origin story (Eden in the Bible), highlighting that – contrary to the Bible – woman was not created from man, nor after man, but that both man and woman were created “from a single cell” (An-Nisā 4:1). The cellular origin of the sexes gives absolute equality to women, which equality is emphasized throughout the Qur’an. Men are not deemed to be “dominant” or “master” over women, but as qawwarm, or a provider, i.e., of food and necessities of life. (An-Nisā 4:34).

This being said, Lamrabet does address what would appear to be the more troubling verses found in the Qur’an such as 4:34 (it does not permit wife-beating, but advises “separation”), 4:29 (making polygamy discouraged, but permissible in certain contexts), and other verses concerning inheritance and women’s testimony valued less than men. Lamrabet points to ahadith (various reports describing the words, actions, or habits of the prophet Muhammad) showing how each of these verses is properly put into context to explain why they do not mean what they appear to say. Lamrabet also explains that such verses are reflective of the Qur’an’s “philosophy of gradualism,” reminding readers that the Qur’an and Islam was adapted to a primitive, tribal, social order, for which accommodations had to be made, despite Muhammad’s clear opposition to them (i.e., any mistreatment of women). Unfortunately, Lamrabet’s arguments regarding these verses will serve to bolster those who already believe in Islam’s fairness toward women, but will not convince those who are already certain that the religion is inherently misogynistic. Nor will the arguments sway those “conservative” scholars who have interpreted such verses to justify mistreatment of women, a position Lamrabet acknowledges: “The philosophy of gradualism advocated by the Qur’an which, among others, sought a progressive liberation and emancipation of women, has been ignored, which has favored the regression of women’s status” (p.164).

Missing from Lamrabet’s thin volume are certain points of discussion, such as the possible differences between Shia and Sunni Muslims, not only in the treatment of women, but in how any differences are related to different interpretations of the Qur’an and the myriad ahadith.

Also glossed over is a discussion of the fundamentally different societies in which Islam claims to be the dominant religion. Coming to mind are such diverse countries as Indonesia (the most populous Islamic country in the world), Malaysia, Turkey, Morocco and Lebanon. As diverse as these societies are, they stand in stark contrast to the Islam (and the role of women therein) of Saudi Arabia, Pakistan, Egypt, Kuwait, Iran, and Iraq. Such a discussion would be particularly important in light of Lamrabet’s argument for extracting Muslim women from the clutches of both Western hegemony and conservative Islamic intransigence.

Particularly unhelpful was the publisher’s patronizing preface. Indeed, the preface largely undermines Lamrabet’s entire effort with its own hegemonic epistemology. The publisher brands Lamrabet’s argument as a “radical reinterpretation” of the Islamic “tradition,” relegating the work as an attempt to bring “the Islamic tradition into conversation with contemporary concerns,” yet doubting whether her effort was done “with a spirit of loyalty and faith in the Divine Authority,” To be sure, to assess the Goliath of fourteen hundred years of “scholastic tradition” in such a small volume is a tall order. Yet Lamrabet does not pretend that her work is such a complete assessment and readily concedes that her role is to merely begin/continue what is clearly a valid set of arguments.

Whether pandering to its conservative reader base or protecting itself legally, the publisher’s detraction illustrates quite literally how contentious is the idea of women’s freedom and independence even within an Islamic framework, and how carefully Muslim women still must tread in asserting their viewpoint on matters of theology, even when it is fully their Islamic right (indeed, duty) to do so. Lamrabet very successfully continues this discussion.