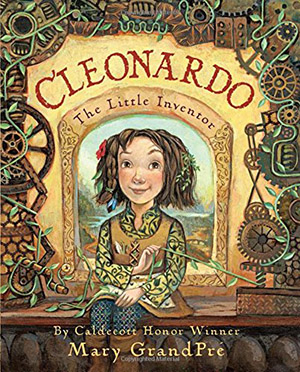 Cleonardo Wren comes from a long line of inventors. Her grandpa Leonardo and her father Geonardo – it’s never explained why everyone’s name ends in –nardo – are also both prolific inventors in their own rights, and Cleo takes after them. While her father works with metal and gears in his workshop, Cleo makes things out of organic materials, like sticky vines, twigs, and feathers. But when they both enter an invention contest in their town, father and daughter’s inventions might be on a collision course – literally.

This book is a sumptuous visual feast of texture, color, and pattern. Each page has something to delight the eye, whether it’s clothing patterns, interesting background details, the Rube Goldberg machines that Cleo and her father make, and much more. For a few chuckles, pay close attention to the background characters in the inventor contest scene, holding their wacky inventions. The rich detail increases the rereading value of this book in a big way.

With a lot of talk among educators and parents lately about how to get girls more interested in the STEM fields, this book might be a great jumping-off point. It can serve as a non-intimidating introduction for early elementary-school-aged girls – and boys too – about the cool things science and engineering can do. It also shows kids that winning is not the most important thing, and that experimenting, putting yourself out there, and just trying are the best first steps toward any goal.

The relationship between Cleo and Geonardo is also an admirable father-daughter relationship. They share common interests, and they even compete, but without any hard feelings. They end up working together and combining their different approaches to invention in a collaborative effort.

This is a book that’s not only visually exciting, it’s also filled with fantastic lessons for little would-be inventors and their parents. The beautiful art is the icing on the cake, but it’s also what will make kids want to read it over and over again – and their parents won’t mind a bit.