Click Here to Start (A Novel) by Denis Markell 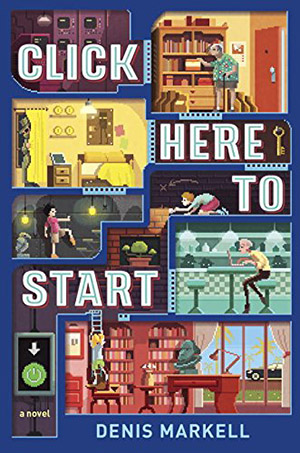 Young Ted meets with his eccentric great-uncle shortly before he dies and is surprised to learn that his great-uncle willed him his apartment. Filled with youthful enthusiasm, Ted, his best friend Caleb, and the new girl Isabel, goes to spend a day digging through old paraphernalia but Ted finds something eerily familiar about the room. Ted has a fondness for escape-the-room puzzles, and his great-uncle’s apartment looks exactly like one of the puzzles he worked on the night before! Could his great-uncle have hidden something for him to find? It all ties back to his great-uncle’s experience in World War II, and Ted and his friends may not be the only people looking for the hidden treasure.

Click Here to Start is a fast paced, fun adventure, specifically geared to the middle grade audience (10-14). It’s great to see more books dedicated to the gaming culture, and particularly those that don’t portray gaming as a complete waste of time. There’s some English Literature lectures thrown in (both Ted and Isabel’s fathers are English professors), as well as a bit of WWII history that keeps the book feeling fleshed out and grounded in reality.

The book does struggle a bit with the character dialogue. The characters never sound like 12-year-olds, but instead talk like an adult thinks 12-year-old kids sound like. Everything feels just a little bit too stilted, as if the dialogue is trying too hard. I can’t say how much of this the target audience will actually notice, but it’s obvious when compared to some other popular middle grade titles. While the book is clearly also aimed at young boys, Isabel’s character is smart, wonderfully snarky, and will draw in the female readers easily.

The book has plenty of adventure, scheming, puzzle solving, and snippets of literature and history making sure things never get boring and will likely keep kids turning the pages all the way through to the end.