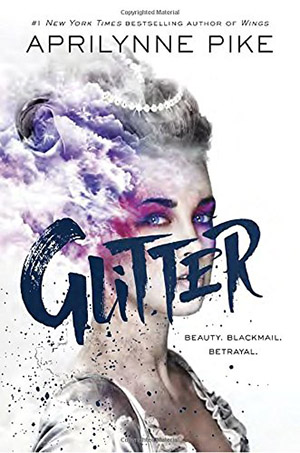 Most young girls dream of being a princess, however, when Danica finds herself engaged to the King of Versailles thanks to her mother’s machinations, it’s the last thing she ever wanted. While the entirety of Glitter takes place in and around the famous French palace – a palace whose inhabitants are obsessed with replicating the lifestyle during the reign of the Sun King – the book actually takes place some time in the future, after the majority of the world’s crops were wiped out from a virus. The Sonoman company stepped up with a series of crops that were resistant to the strain, and in the following chaos, semi-cheated their way into ownership of one of France’s most recognizable historical sites. However, much of the historical background and world building in Glitter is too little too late, and many readers will have wandered off feeling lost by the time they figure out the framework for the actual story.

Danica is an outcast – a rags-to-riches background thanks to a father who unexpectedly inherited shares to the company. Her mother is hell-bent on seeing Danica climb the social ranks as much as possible, forcing poise and dance lessons on her, as well as plastic surgery. Despite Danica seeming to have hated all of this, she never appears to have fought back against her mother’s will, making her an incredibly passive and abused character. Unfortunately, her complete and total passive nature also makes her incredibly unlikable. While she seems fairly apt at navigating the social cues in the old-fashioned faux court, she lacks foresight and can’t see how her plans to escape Versailles before her fixed wedding date to a murderer could possibly end up badly, although it ends in a very expected and un-shocking fashion to anyone paying attention.

The book goes into the darker sides of society – found even in the glittering throng of rich and famous – and deals with elements of drugs, affairs, political marriages, and self-harm to various degrees. The largest and most prevalent themes are drug use, and Danica’s self-harm. Danica’s self-harm comes across in the form of over-tightening her corset to cause herself pain – pain that she can control when everything else in her life feels out of her control. This mentality is often found in teens who cut themselves, and suffer eating disorders, and is genuinely distressing to read about. Despite the uncomfortable nature of some of the topics of the book, it is good to see these being discussed for the age groups that are most vulnerable to them.

Glitter has many elements that were interesting – the politics involved in running the company, the reasons behind their obsession with ancient era fashion and court life, the social hierarchy, the available technology, and the glimpses of life outside the palace – but Danica’s passive and panicked bumbling pretty much hamstrings what could have been a great book, into one that is just OK. The book had much unrealized potential, although there is hope that the sequel may focus on some of this book’s weak points and flesh out the series.