Hard to Die (To Live Forever) by Andra Watkins 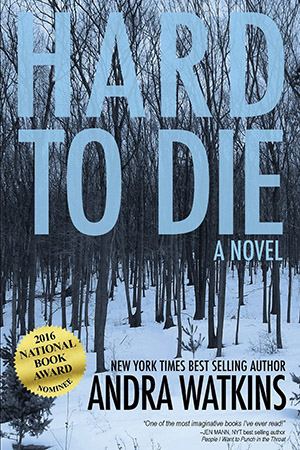 Andra Watkins has written another genre-busting novel. Hard to Die weaves components of paranormal thriller, historical fiction, mystery, and even romance. She ties these genres together with solid craft in surprising ways.

Like she did in her debut novel, To Live Forever, Watkins opens the story in Nowhere, a place between life and death where spirits whose deaths remain unresolved have an opportunity to complete an assignment to help a living person change their lives for the better. A successful assignment allows them to move on from Nowhere. A failed assignment keeps them there to take on another assignment.

The heroine in Hard to Die is Theodosia Burr Alston, daughter of Aaron Burr, whose character also stars in the smash Broadway hit Hamilton. History tells us that the boat she was on was lost at sea and her death has remained an unresolved mystery. The book opens with Theo attempting to get her bearings on a train in Nowhere. Excitement begins immediately as the two protagonists and the antagonist all appear within the first ten pages. The story races to its conclusion.

Point of view alternates between Theo and Richard, a former spy and current West Point cadet, who becomes Theo’s assignment. This serves to create tension and allows the mystery to ebb and flow without revealing too much of itself too quickly.

Watkins is clever with the notion of time. The physical action takes place in 1950, but relies on Theodosia’s memories of the years on both sides of the transition between the 18th and 19th centuries. There are surprises there and the reader must pay attention to the action and keep track of when it is happening.

Richard’s voice in his sections sometimes requires patience to follow. His early-20s aggression and demeanor, while understandable, may grate because of his relative cluelessness about so many personal issues. At times, it was difficult to care for his boorishness and his careless assumptions. On the other hand, Theo is rendered as a fiery young woman, desperate to successfully complete her assignment and keep herself emotionally intact. Her longing to see her long-dead son is tender, fierce, and well done.

The book has wonderful historical insights, the storytelling exhibits exquisite craft, and the villain is rendered with chilling clarity. The novel’s climax and resolution may leave some readers unsatisfied, but it will also certainly leave them wanting more of this genre invention that Andra Watkins is pioneering.