Hoagie and Katie by Rio Koviak 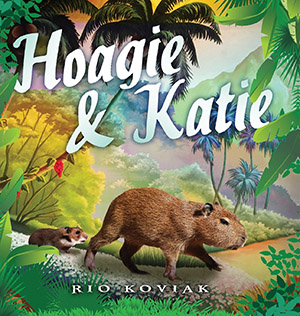 Hoagie and Katie is a thoughtful animal tale of two unlikely friends, a hamster and a capybara. A capy-what? Exactly. The capybara, also known as Hydrochoerus hydrochaeris, is the largest rodent in the world. They are found in South America and despite the name being not familiar, they are not an endangered species. Full grown they can weigh as much as an average adult human! Thank you Wikipedia for filling in those blanks. [I wonder if these were the inspiration for The Princess Bride’s ROUSs?] The author combines her two diverse careers and education theater/film and animals create this first in a series tale. Katie is the affable capybara, embracing the animal’s characteristics of being social, gregarious, able to bark quite menacingly, and great at swimming. Hoagie is everybody’s hamster, complete with ball and big attitude in a tiny body, although he finds himself starting to ask some mid-life questions through his friendship with Katie.

Katie and Hoagie encounter an adventure or two, requiring teamwork and courage to overcome and make a few new friends along the way. Hoagie the hamster is relatable and Katie the capybara will inspire the young reader to learn more. This story is written approximately for a 5 to 7 year age frame, and would be best read together as there are more words than pictures but not quite a full chapter book that might be discouraging for some. I think it would be good book to challenge young readers to move beyond their favorite picture books. Speaking of pictures, those included in the book are colorful, related to the chapter’s theme and present realistic animals and vivid jungle colors. The author concludes this first adventure on a positive note with some good lessons learned and attitudes role modeled.

I look forward to the next adventure of Katie and Hoagie. Young readers who are really into animals and wanting to read more ‘chapter books’ will likely find this to be an enjoyable book.