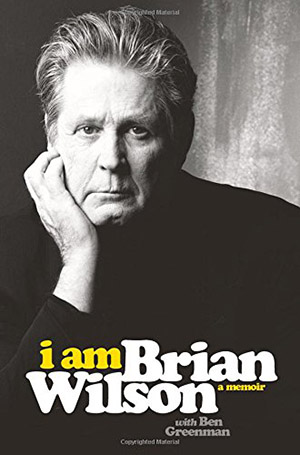 Brian Wilson’s memoir is a frank and revealing portrait of a troubled and popular music pioneer. It details his life with an abusive but musically encouraging father, a musical career that starts out with Brian becoming deaf in one ear, and proceeds through a tangled path of rock and roll stardom and idolatry. Many rock groups have two leading members whose love-hate relationship seems to fuel their creativity, In the case of the Beach Boys, much of the narrative is a perpetual testing and fighting between Wilson and lyricist Mike Love (Love has recently published his version of the story).

Wilson, with the help of writer Ben Greenmail details Brian’s constant search for creativity and new directions, tempered by Love’s concern for catering to the band’s existing pop audience. Along the way, Wilson endures a series of mental breakdowns, and partially successful but enslaving therapy from a psychologist named Eugene Landy. Ultimately, with the help of his wife Melinda and one of Brian’s brothers, Brian becomes successfully disentangled from Landy’s endless forceful edicts, and his medication is re-adjusted through the help of some doctors at UCLA.

The book constantly returns to the years 1964, when the band was experiencing tremendous success, but Brian experienced a mental breakdown. This makes for a sort of skewed chronology that is occasionally annoying to the reader. Ultimately Brian finds a supportive wife and a new family. As the book describes it, his life is a sort of daily struggle against the various voices that Brian hears, and his insecurities as a performer. It makes for a touching, if somewhat frightening, life story.

There is considerable honesty in Brian’s admission that when he wants lyrics that dig deeper into his life and dreams, he turns to other lyricists, notably Van Dyke Parks and Tony Asher. The premature death of his two brothers, who were also members of the band, are another revealing and sad portion of Wilson’s life story.

This book is worth reading if you are a fan of the Beach Boys, or enjoy reading about how even extreme mental difficulties can be faced, and if not overcome, at least lived with.