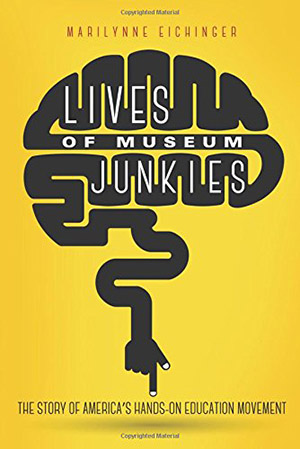 Marilynne Eichinger is the founder of the Impression 5 Science Center in Michigan and former president of the Oregon Museum of Science and Industry. Born into a well-off Jewish family in Philadelphia and married at a young age to an MIT student, Eichinger became a mother at a young age and was, in many ways, an incredibly unlikely candidate for helping to revolutionize science museums and hands-on education in the United States. But in the late 1960s, she and a friend began brainstorming an interactive museum that they could create. The rest, as they say, is history – and is detailed in Eichinger’s book, Lives of Museum Junkies.

Through interspersing profiles of people integral to the hands-on education movement with stories of her own beginning and career in the museum field (and her life today), Eichinger provides a not only helpful tips for people who strive to be innovators in a field – even if the desire is predicated on a dearth of general availability – but also a valuable historical record of the political and social conditions in the ‘60s that allowed the revolution of science museums in the United States. Eichinger tells the tale of her early meetings, the lack of forethought that could have crippled her project but didn’t, and of the various people who helped her along the way. It’s a riveting story – but just as interesting is Eichinger’s description of her own personal evolution, of the ways in which her journey was impacted by the various revelations that occurred as she proceeded along her route.

Lives of Museum Junkies manages to be intriguing, endearing and thought-inspiring, and not only for science museum junkies but for anyone who has fond memories of school trips and electric orbs and likes to learn about the people behind the institutions we take for granted.