Skewed: A Critical Guide to Media Bias by Larry Atkins 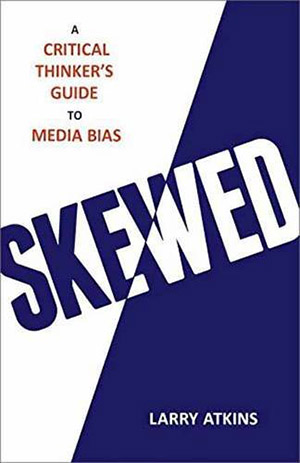 Everyone knows about liberal media bias. But is media biased? Larry Atkins says yes, but in ways that are not always partisan or intentional. There are many types of journalism; some of which are obviously biased and some that strive to avoid any semblance of it.

While admitting of having liberal inclinations himself, Mr. Atkins has attempted to give a “balanced, objective, and centrist presentation.” I believe he has succeeded in this, and so has minimized the problems inherent in the subject.

The main force driving the content of any media platform is money. The mainstream news maintains its audience share by, basically, not offending anyone; not fertile ground for bias.

Fox and MSNBC use bias to appeal to their intended audiences, their base. They are aided in this by every person’s innate affirmation bias, which leads us to look for sources that agree with us. This combination of using bias to attract viewers looking for biased news is part of the vicious cycle driving the partisan divide in this country.

As mentioned above, the Internet is an unregulated scrum of such a wide range of information that it can only, really, be evaluated on a case-by-case basis. Against this background “let the buyer beware” and “forewarned is forearmed” are the only weapons at our disposal to become informed while not succumbing to lies, damned lies, and statistics.

This is not the first great divide in this country and, arguably, not the worst. Mr. Atkins provides a thorough overview of the trends and events in the history of bias. Some of it beneficial, such as muckraking journalism of the ‘30s, which exposed inhumane and filthy meat plant practices. There was also yellow journalism, which brought us the Spanish American war. Most pressing is today’s partisan divide that is still working itself out.

Mr. Atkins doesn’t really make value judgments – other than disapproving of outright lies – relying, instead, on the probity of the viewer to inoculate themselves against any pernicious effects of any bias. Does it work? Not really, but it’s what we’ve got.

This reviewer has been interested in such things for a while. I would like to recommend two books that might provide some additional help in navigating the bias territory. The first is The News: A User’s Manual by Alain de Botton. It is a rather philosophical, yet practical assessment of the news that provides a valuable awareness of what’s happening when news is presented and consumed. The second is The Righteous mind: Why Good People Are Divided by Politics and Religion, by Jonathan Haidt. A fine, informative and, non-judgmental study of the way we think, others and ourselves.

Skewed thoroughly covers bias, in all its variety. The others books may help mitigate the pernicious effects of the same.