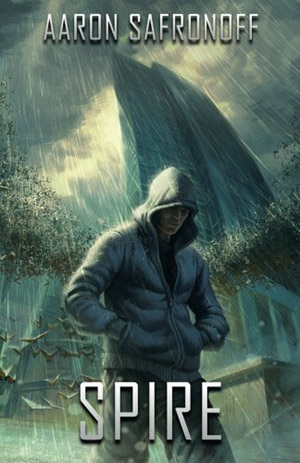 In the Foreword to his novel, Spire, Aaron Safronoff explains that his story concept came as one complete scene and grew from there. The organic nature of his inspiration is evident in the telling of his tale. The storyline unfolds in manageable chapters from one character to another. It begins as a first-person narrative of an unnamed person continually searching for the next high, complete with significant risk-taking behavior. He is introduced to his latest drug by a source he trusts. It is clear that he’s been observed, particularly when, in the midst of his altered experience, he is picked up and taken to the Spire. As the story continues, several other characters emerge even though their connections to each other are loose. The thread holding them all together seems to be the new drug. It quickly becomes clear that the story is set in a world of high technology and its affiliated big-brother watchfulness as well as enhanced genetics and implanted skills for those who can afford them.

As Spire begins, its similarity to other science fiction storylines is evident: a world with highly developed technology, continual and consistent supervision from an impersonal yet accepted authority, experimentation with or on some of the population. Although these elements parallel other high-tech, highly supervised worlds, Safronoff wove together a world where good and bad may appear obvious until the varying shades of gray in motives and behaviors creep out. His character development is unhurried, which works well with his steadily unfolding plot. His shift in voice, from the main character’s first-person narrative to a limited third-person when necessary, is barely noticeable as the larger picture of the novel develops. If science fiction is a preferred genre, Spire invites the reader into a complex world that defies the established notion of functioning. At its core is the idea of the development of the entire spectrum of human potential. It provides the reader with questions and fantastical possibilities to ponder.