The Boy Who Wanted Wings by James Conroyd Martin 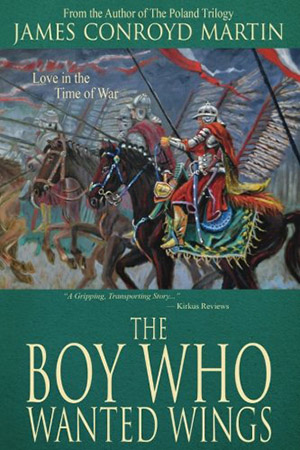 In his Historical Note at the beginning of his new historical novel, The Boy Who Wanted Wings, James Conroyd Martin underscores the date of the pivotal Battle of Vienna between the Ottomans and the Christians in his book: September 11, 1683. From the first chapter onward, even though the story focus is preparation for battle, the undercurrent on which it rides is the ethnic disparity among those who have some status and those who have less and those who are physically or culturally different.

Sixteen-year-old Krystyna Halicka has managed to be sent home from the convent boarding school she has been attending. She clearly loves the area around her city of Halicz and is glad to be home. As the carriage bringing her and her escort, her older brother Roman, stop close to home, she jumps out to collect wildflowers and encounters two brothers working in the field. They are of a lesser status than she is, but the darker one, Aleksy, catches her attention. She catches his as well.

Krystyna’s brothers, Roman and Marek, train with others of their social rank to become horse soldiers in King Jan III Sobieski’s army. Aleksy comes upon the training and watches from a hill, longing to be a hussar, a lancer on horseback. His social status prevents that and, by a twist of fate, he becomes instead a retainer for Krystyna’s brothers. While the brothers have been away at their training, Krystyna and Aleksy have been meeting. The tension between the brothers and Aleksy grows as they head off to the eventual Battle of Vienna.

James Conroyd Martin deftly develops an intricate web of the social status of the era. As the story progresses, brief moments appear when those lines are stretched and crossed even as they spring back into place. His characters are complex, well developed, and consistent. Their emotional lives are exposed even as the horrors of war loom. The Boy Who Wanted Wings is an excellent read whether one’s preferred genre is historical fiction or not.