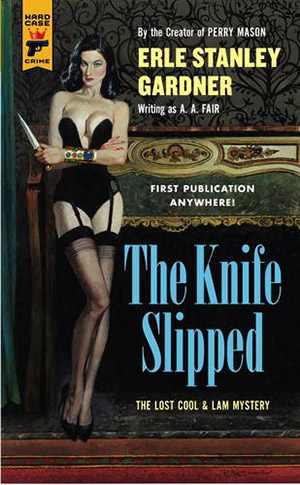 Donald Lam has just been hired by Bertha Cool as one of her detective agency operatives. Bertha’s secretary, Elsie, tells him he works today. Bertha calls him into her office and says to shut the door; he shuts the door. She tells him to sit; he sits down. Bertha then sends Donald out to work on a divorce case. As he leaves she gives him expense money – 50 cents! Fifteen cents for “a very good hamburger”, fifteen cents for “two or three telephone calls,” and he is to keep an expense account and had better not cheat her. Seems impossible? Well this is the beginning of The Knife Slipped written by Erle Stanley Gardner (as A. A. Fair) in 1939. Mr. Gardner was the author of over 100 novels and is best known for the Perry Mason series, a hardnosed attorney. Mr. Gardner created several other series and the Cool and Lam team was his next largest series, with 29 novels in total.

The Knife Slipped was the second novel in the Cool and Lam series but was never published until now (75 years later) because the publishers felt the language used by Bertha was too rough. By today’s standards it is fairly benign. The primary characters of Cool and Lam are well developed over the course of the novel as their relationship evolves. The story is rapidly paced with multiple threads that develop and have to be tied together. This is more than a simple divorce case with a two-timing husband. There is larger corruption afoot! For those not old enough to have viewed black and white televisions or to have read the Perry Mason series, this book is a nice introduction to that era of gumshoe characters in their classic form.