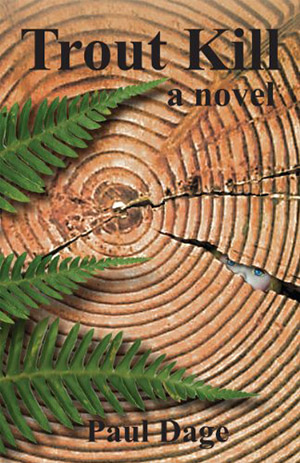 Paul Dage’s Trout Kill tells the tale of Eddy Trout, a hard-living Vietnam vet who resides, along with his wife and dying dog, in a Podunk town in the Pacific Northwest. The product of a gruesomely traumatic childhood, Eddy is a jack of all trades and works at a bar while helping his farmer/winemaker/poet friend, Ernst, build a castle for his newfound winery. He also has secrets; secrets buried deep inside; secrets that eat at him; secrets he shares with his older sister, Em, who suffers from (trauma-induced?) mental illness; secrets that drive him to destructive behaviors and impulses. When one of these impulses results in him running down a doe on a winding road, frightening and infuriating his wife, and when an ill, elderly stranger comes to his aid, it sets Eddy down a road that is at turns infuriating, heartbreaking, and unbelievable.

Torn by the decline of his cancer-riddled dog and falling out of love with his super Christian wife, Eddy drinks a ton (Jack mostly, which is disappointing to this whiskey lover), smokes a lot of weed (grown by Ernst, whose wife is somehow oblivious to its existence), and constantly seeks thrills. But when his sister is jailed and reports encountering their long-absent father, Eddy, who was raised by his abusive uncle, is thrown into a tailspin. When he discovers that the man in question is none other than the man who stopped to help him when he struck the doe, things only get worse.

The first installment in a three-part series, Trout Kill is self-published. However, it manages to avoid the pitfalls of many self-published novels – that is to say, Dage can write. The man is a writer, plain and simple, and even those of us who are not huge fans of the story and who simply wish Eddy Trout were a more sympathetic character cannot deny the skill in Dage’s deceptively simple, well-crafted sentences. His rages, his impulsiveness, his violence – all are understandable in light of Eddy’s past, but they aren’t conducive to caring about him. He’s struggling, he’s lost – but he hurts others, and that makes him, in some ways, almost as bad as the people who have hurt him. I’d love to see how he reconciles that in the upcoming two books in this series.