Where Do Rivers Go, Momma? by Catherine Weyerhaeuser 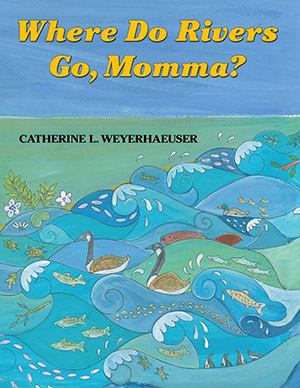 In 2011, artist Catherine L. Weyerhaeuser published a children’s book about how mountains are formed. Depicting a young child asking her mother about something in nature that piqued her interest, in Where Do Mountains Come From, Momma? Weyerhaeuser utilized her background in geology and elementary education to explain for curious kids scientific concepts in a simple yet exciting way. Likewise, in her new book Where Do Rivers Go, Momma? from Mountain Press (known for its series of Roadside Geologies for many states), she combines her colorful and charming illustrations (made with acrylics, gouache, and ink) with scientifically accurate text.

In just 32 pages, one can learn about the effect of gravity on water, how water encompasses our planet more than land, water in its different states of matter, glaciers, the water cycle, erosion by water, underground water, the effect of mountains on how wet different places can be, and more. Also, a few major rivers of the world are described at the end. And just like the first book on mountains, Where Do Rivers Go, Momma? implicitly stresses two important aspects of science education: that parents should be engaged in learning about science with their children, and that young girls interested in science should be supported rather than discouraged.