A Gentleman in Moscow: A Novel by Amor Towles 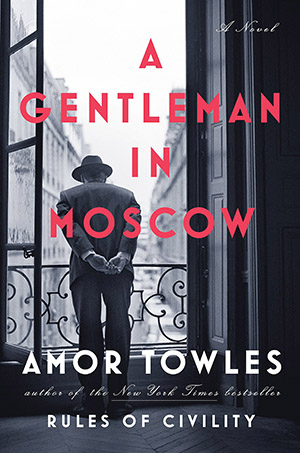 Amor Towles gives the reader insight to Russia in the 1920s through the eyes of Count Alexander Rostov. The Count is a former aristocrat “sentenced” to house arrest in the grand Metropol hotel. At first his life doesn’t change too much with his large, elegant hotel room furnished with his sacred belongings, but he is eventually moved to an attic room with little space, Spartan furnishings and only a few of his treasured possessions. Nonetheless, the Count is able to carry on and watch the changes happening in Russia from inside his four walls. As his situation becomes more “common” he makes friends with the chef and various guests in the hotel, His sudden responsibility for a six year old changes the Counts perspective drastically, which makes the story that much more interesting.

Towles depicts the era in his book in detail so readers with a keen interest in Russia during the turbulent times of the 1920s and 30s will appreciate the honest account. It is easy to get lost at times with the seemingly back and forth style that Towles writes in, but characters are interesting. Watching the Count grow from aristocrat to true human being made this book a worthwhile read.