A Pilgrim for Freedom by Michael Novakovic 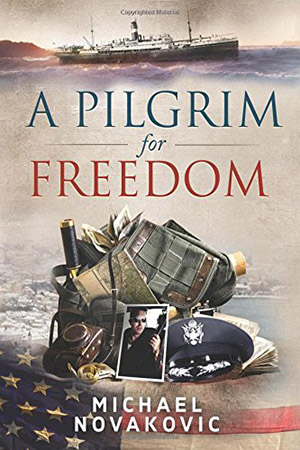 A Pilgrim for Freedom is one part biography, one part history, and one part political discussion. Michael Novakovic was just a boy when he and his family were forced to flee Yugoslavia due in part to rising violence as the Croatian militia began their fight for independence in earnest – including Serbian cleansing – and the Italian Fascists nearly executing his father. The year was 1942, and the Second World War had already begun. What follows is the story of Michael and his family’s exodus from Yugoslavia, their seven-year sojourn to the shores of the United States, Michael’s quest for citizenship and his US Army experience, as well as his later business entrepreneurship. This is a story detailing a life that lived the essence of the American Dream.

The book is an engaging memoir that begins by detailing Michael’s pre-war childhood, which provides a stark contrast to his experiences throughout the war. It’s clear how his experiences with different military service members from various countries and political systems greatly influenced his desire to give back to the country he eventually came to view as home. The fact that he spent time in many countries over the year (Italy, Buenos Aires, Vietnam to name a few) and that many of the places were places of conflict at the time, keeps the pages turning quickly.

The book is written in a style that is direct and to the point and the chapters are short. This allows for easy reading, even if you only have limited time. While it may lack some of the more polished vocabulary and sentence structures found in most popular books of our time, Michael’s decision to focus on the larger world events that framed his journey instead of trying to recount his emotional status at any given time (a pitfall of many memoirs) was a good choice. This worldview helps to ground the narrative in time, but also provides history lessons for many places and events that may have been glossed over (or never covered) by the American education system.

Michael Novakovic displays more patriotic American pride in this book than many natural born citizens ever have in their entire lifetime. In a political climate that has completely polarized, an election year that is one of the most aggressive and embarrassing on record, and a society that has become obsessively focused on instant gratification and greed, this book is a beautiful reminder of how people can do wonderful things in horrible times. It is a glimpse of overcoming terrible odds, helping others when they are down, and giving back to a country and a people that made wonderful things possible. The author perhaps says it best:

“My fear is that my fellow citizens are forgetting a historical era when the United States was truly a source of hope for most oppressed people in the world. I also worry that Americans are losing sight of the kind of society that values freedom, honor, responsibility, and industriousness. Perhaps, if others read about the life of an obscure boy from Split and his surprising journey to Villanova, Pennsylvania, they will marvel not at the boy or the man he became, but at the nation that made such a journey possible.”