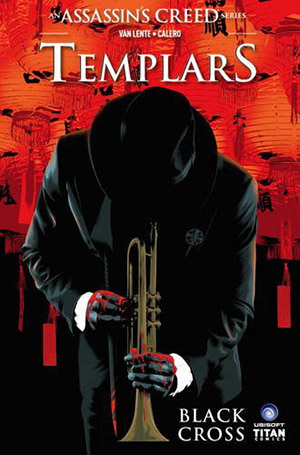 The Assassin’s Creed video game series has covered many adventures, various time periods, and multiple engaging (some less than others) characters. The series has even branched into books and comics with varying success. Assassin’s Creed: Templars Volume 1: Black Cross is luckily one of the better tales in the collection and focuses on Templar characters instead of the Assassins for a change.

With the Templars and Assassins locked in conflict due to differing philosophies despite their similar goals to protect the world, who makes sure that the various players don’t abuse their power? In the Templar order, that person is known as Black Cross. The year is 1925. Shrouded in mystery and often considered a myth, Black Cross is sent to reign in a rogue Templar, but as usual things are more complicated than they appear.

This is a refreshing comic, and though the characters remain remote enough that readers may not become very attached to them, the intrigue and story are more than enough to keep the pages turning. Calero’s illustrations are a stylized realism that is a perfect match for the time period and subject matter. Black Cross himself is beautifully enigmatic, and is likely not who the reader expects, although there are plenty of hints early on in the book for the discerning reader.

This comic offers a glimpse into the inner workings of the Templar organization, which has for the most part remained an enigmatic and evil force in the Assassin’s Creed universe. Whether or not it humanizes them is for the reader to decide. Either way, this is a graphic novel that is a most welcome addition to the series.