Asylum: A Survivor’s Flight from Nazi-Occupied Vienna Through Wartime France by Moriz Scheyer 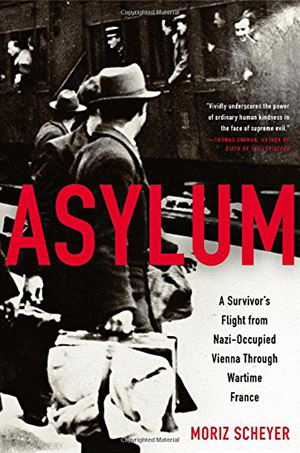 How many new memoirs or semi-autobiographical memoirs are left to add to the collective understanding of WWII and its atrocities? Shortly after Elie Wiesel, who won the Nobel Peace Prize in 1986, died in July 2016, Time Magazine reported that just 100,000 holocaust survivors are still alive, and the youngest are around 71 years old. Many of the new editions to Holocaust survivor literature are based on memories now several decades old, such as Marceline Loridan-Ivens’s memoir But You Did Not Come Back, which is both a remembrance to her father and a warning to younger generations of the dangers of discrimination.

A newly discovered firsthand account of WWII as it unfolded is an uncommon gem. After his father told him he’d destroyed the manuscript because it was too self-pitying and anti-German, P.N. Singer found a carbon copy of his step-grandfather’s manuscript in the attic. Singer translated this never-before-published memoir into English as Asylum: A Survivor’s Flight from Nazi-Occupied Vienna Through Wartime France by Moriz Scheyer. At the beginning of the war, Scheyer, an important literary journalist, lived in Vienna, but when the Nazis took Austria, he fled to his beloved Paris where he’d lived during the 1920s. He noted the general apathy of the French he met while living in Paris and the frightening flight from the city when the German Occupation began. Shortly upon returning to Paris, he was interned at Beaune-la-Rolande with other foreign Jews. He was released due to his advanced age, and, after other harrowing incidents, spent the final two years of the war hiding in a convent in a provincial French town. The breadth of his experiences makes Scheyer’s memoir an important historical document.

Scheyer insists throughout that this is not a literary work but is something far more important. He wrote it throughout the war, like a diary, but it doesn’t read like a diary. Through each stage of his journey, he concisely describes his impressions of the various attitudes of the people he meets, the circumstances he finds himself in, and the overwhelming anxiety of not knowing when the terror will end. He encounters both the worst and the best of humanity, making him reevaluate old beliefs and himself. Since this is a manuscript written by a man fleeing from persecution, there are some details and facts that may not be historically accurate, but this is easily understood and not important in the larger picture. Only such an immediate and intimate account of WWII can give an insider’s perspective of what it would have been like to be an Austrian Jew in France during WWII.