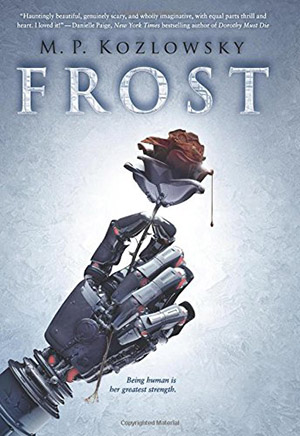 M.P. Kozlowsky’s young adult, science fiction novel, Frost, combines fairy tale elements, a Dystopian society, robots, adventure, and survival to create a thrilling coming-of-age novel. Frost has been alienated from the rest of the world, hiding with her robot, Bunt, and her pet Broot named Romes, since she lost her parents due to the world’s destruction. When Romes becomes ill, Frost sets off on a journey to find the Battery, a place rumored to exist that is thought to be unaffected by the world’s chaos. She believes there will be medicine to cure her pet at the Battery. On her journey she must avoid Eaters, people with deteriorating minds and a thirst for flesh along with the dangers of the wilderness and rogue robots. Another danger is John Lord’s country, which is part of the once thriving city that controls the remaining people who are enslaved under horrible conditions. Two humans Frost meets, Flynn and Barrow, assist her on the journey where she encourages them to hope for a better world and helps them to understand that some robots can be trusted.

This story is told through a third person point of view that unfolds Frost’s story as well as Flynn’s. Frost’s backstory is very interesting and aids the coming-of-age story by allowing her past to be shown to understand her present actions. On her journey, she learns more about herself since identity is a theme within the story. Frost grows as a character from the sheltered girl who had been alienated from the world to protecting and fighting for Romes as she continues on her journey. Her friendship, love, and loyalty to her pet drives the novel forward and relates to its themes, love, loyalty, and empathy, which is what makes people human. Each character is developed through the novel, including their backstories, which adds depth to the story through its complex characters.

Through vivid imagery, metaphors and symbolism, the world draws the reader in. The world building is very descriptive, creating clear visual images that add to the character’s motivations and obstacles created by the world. The author’s creations, such as John Lord, the Eaters, and Broots add to the world that was created, all the elements cohesively working together to create the Dystopian world that Frost lives in.

The themes of the novel focus on what it means to be human. This story features humans fighting against robots, thereby advancements in technology and key differences between the two are illustrated, such as loyalty and empathy. Some robots in the novel have a person’s consciousness uploaded onto a disk in the programming. Freedom and life are questioned by those in this situation uncertain whether they are human or machine. Technology and its advancement is also another theme where people invent what could cause their destruction. Hope is what most remaining humans have lost and Frost’s hope is symbolized by the Battery. This hope is what keeps her struggling to survive on her journey.

With many questions left unanswered due to a quick conclusion, readers will be left waiting for answers in another installment. This fast paced, science fiction, fairy tale incorporates many diverse elements that make for an interesting reading experience. People who enjoy science fiction tales, fairy tale elements, suspense, and plot twists will appreciate this well-written tale.