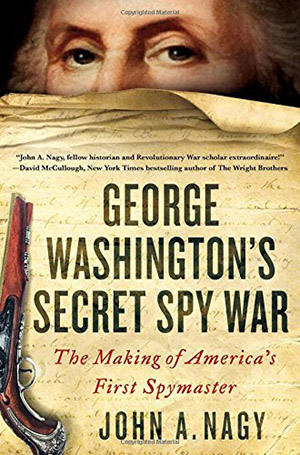 During the French and Indian War George Washington apparently had some experiences with spies and espionage, not all successful or significant. In the book George Washington’s Secret Spy War: The Making of America’s First Spymaster, John A. Nagy presents extensive detail of Washington’s efforts at learning of his enemies plans, locations, and strength, with the development and utilization of spies, the means of communication of information, and the assessments of that information.

Washington’s use of spies was critical to his decision making to keep the Continental Army functioning and a threat to the British. The book is structured with the first 10 chapters such as Double Agents and Black Chambers and the Medicine Factory covering material over several years. The final 5 chapters focus on the plans, preparations, deceptions, and execution of Washington moving the Continental Army to Yorktown and the ultimate defeat of General Corwallis. This is the final book written by Mr. Nagy (he died April 1, 2016), one of the experts on espionage and spies of the Revolutionary War. Three previous books were written with narrower focuses; spycraft, Dr. Benjamin Church, and Pennsylvania spies. The details presented in this book are so extensive that anyone not well versed in the specific locations in New England and the East Coast may find themselves reading this book with the assistance of a nearby search engine. The information is considerable, which is often quite interesting and essential to bringing the activities alive in the minds of interested readers.