Honor Before Glory: The Epic World War II Story of the Japanese American GIs Who Rescued the Lost Battalion by Scott McGaugh 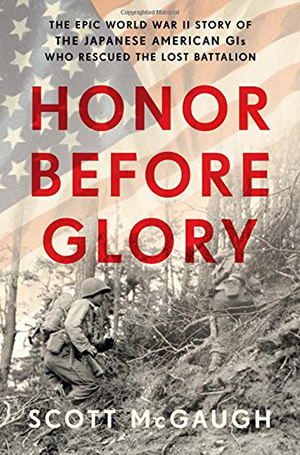 A segregated infantry unit of Japanese-Americans in October of 1944 was sent to rescue another unit of American soldiers trapped in the mountains of eastern France. That unit was the 442nd Regimental Combat Team. Although this combat action was only from October 24th through October 30th, a unit with 2,943 riflemen and officers October 13th, had 140 killed, 43 missing, and 1,800 wounded by the end of October.

Honor Before Glory, written by Scott McGaugh, is a history of that battle. In his recounting, McGaugh has presented in significant detail not only the battle but significant history of the unit at its inception as well as afterwards. The major focus of this effort is to personalize it using oral histories of surviving participants as well as the use of the official records. You are presented with their experiences, feelings and observations as members of the U.S. Army but who were “relegated” and segregated into a unit for Japanese-American soldiers commanded by non-Japanese officers. Despite this, they demonstrated as individuals – and as a unit – bravery, sacrifice, humility, and commitment to their country, officers, and their fellow soldiers. In the final chapter “Honor Bestowed,” the lives of a number of survivors are explored and is a personal, touching, and emotional inclusion.

This unit is the most decorated unit for its size in American warfare history. The unit was initially composed of 4,000 men with 14,000 men ultimately serving in the unit. It was awarded 8 Presidential Unit Citations, and the men received 21 Medals of Honor, 52 Distinguished Service Crosses, 560 Silver Stars, 4,000 Bronze Stars, and 9,486 Purple Hearts. These men are honored by this book and deserve the appreciation of this nation.