If the Magic Fits (100 Dresses) by Susan Maupin Schmid 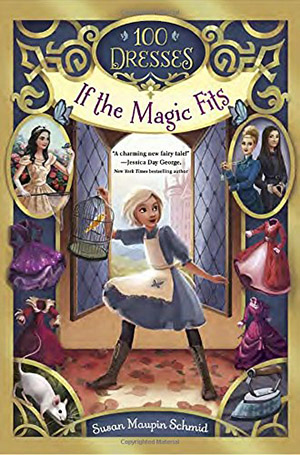 Darling Dimple is an orphan – she doesn’t actually have a dimple, her half-blind surrogate mother Jane named her after her actual mother died. Her universe is the royal castle in the kingdom of Eliora, in the employ of Princess Mariposa. The castle is a mysterious place, full of magic, moving statues, helpful animals, and strange goings-on. But the castle can also be a harsh world for its servants, working hard and punished harder for transgressions, especially the Under-Servants in the cellar who spend their days chopping vegetables and scrubbing pots.

Due to happenstance, Darling becomes an Upper-Servant, ironing linens and clothes for Mariposa herself, and in a closet adjacent to her working space one day she discovers magical dresses that can disguise you as anyone else – the dress chooses who to make you look like, in order to best suit your purpose. With mysterious plans afoot and talk of releasing long-imprisoned dragons so that an evil prince can stage a takeover of the kingdom, Darling needs the dresses – and her position among the Princess’s closest servants – to stop the prince and save everyone.

At first, If the Magic Fits might seem superficial: a lot of romanticized talk about princesses, heavily detailed descriptions of clothing, and chock full of fairy tale tropes. But Darling turns out to be a wonderful heroine, flawed, as any preteen girl would be, but smart and able to solve any problem. This is not a story of a hapless heroine who merely lets things happen to her. Darling takes action, figures out plans, solves mysteries, and does it all while keeping her job and doing it well. In a lot of young adult stories, you get the sense that the crisis of the story is really averted by the adults, and the child heroine just bumbles into it, but not with this one. Were it not for Darling’s intelligence gathering and bravery, the Princess and all the castle’s inhabitants would have been in deep trouble indeed.

This is a fairy tale from the other side of the class divide: the servant is the hero, not the princess. While in disguise, Darling attends a luncheon given by the princess and marvels at the spectacle and the waste, as the nobles eat only one bite of a dish and the rest is thrown away. The castle seems like an unfair place, and it can be frustrating to read about servants being thrown out into the streets for even a minor infraction – and this doesn’t make you sympathetic to Princess Mariposa, whose first act that we read about is firing a young girl for not ironing her petticoats well enough. It’s a cutthroat world, but this ups the stakes, and appeals to young readers who relish an antagonist that they love to hate.

If the Magic Fits would also be very appealing to a certain type of romantic, daydreaming young girl, who loves all things beautiful, but also likes some substance to go along with her style. The book has sumptuous descriptions of clothes, jewelry, the royal food, the castle itself, and the magic dresses are described in a particularly satisfying way. The illustrations of dresses that appear at the headings of each chapter spark the imagination even more.

But although the book does prominently feature gorgeous gowns and loving descriptions thereof, it would be a disservice to say that that’s all there is. There is intrigue, plot twists easy enough for young readers to grasp while still being interesting enough to thrill, friendship, familial love, action, true heart-pounding suspense, and a heroine who believably saves the day. Darling Dimple is a terrific role model for young girls, and I look forward to sequels where we can see what else she’ll do and what other evil she will thwart.