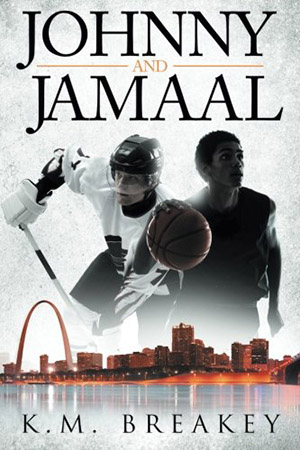 Johnny & Jamaal is a book about racial violence in modern society with a heap of hockey on the side. Spoiler – there will be a lot of ‘Whites are the real victims, but no one will listen to the truth, thanks liberals’ agendas pushed. The main characters are White rich guy, Lucas, and Black very rich gal, Chantal, both living in Vancouver. Luke has a bit too much of the ‘main character is oblivious thus needs to be told things’ trait, but is otherwise a standard White male with friends, work, and a girlfriend. Chantal is the impassioned college girl, described as very hot and very intelligent, but who giggles and pouts like a child, says vapid things, and has mostly petty motives. She also happens to be black so she can help her boyfriend grow, and she can shift away from a Black Lives Matter mindset with more impact on the reader.

The title characters are more McGuffin than person. Johnny is the stereotypical perfect Aryan athlete, a hockey player from Vancouver with “an immaculate physique that’d make an atheist believe in God,” a large “you-know-what,” and “flowing mane of blonde locks that would put Fabio to shame.” He’s that arrogant asshole jock who’s somehow still popular. Jamaal is the “long and lean” rising basketball star in St Louis, only speaking “the Queen’s English” for the cameras, with “no dad to speak of” and a fondness for drugs, “bitchas,” and “the casual bullying of some White dudes for sport.” He is also where we are introduced to the pervasive notion that all Black people laugh in the same manner: “wooooooooo-eeeeeeeeee ahahahahaaaa” (insert old timey knee-slapping here). These two characters serve only as plot devices and not really as actual people. There are several other side characters that are mere window dressing except for two: Wilbur Rufus Holmes Jr. and Joshua.

Josh is a hardcore racist whom Luke and the author will shamelessly cover for with the ridiculous “hates everybody equally” argument, and attempt to justify with vastly misconstrued “facts” (see “lie” in the dictionary for information on how these “facts” work) about how much like vicious beasts Black folk really are. This prejudice is echoed by many other ‘good guy’ characters, quietly in the narration, and even in Luke.

It’s rare that a book could make a politically moderate, socially open-minded, racial mutt feel like a racist, but K.M. Breakey has done it. Not because one could find themselves agreeing with the outrageous stereotyping of every African character, or hating the black (not African American, this is Canada where they’re called just “Black” apparently) characters who were some level of angry, greedy, and selfish, or even for sympathizing with the bigoted characters, which is actually everyone. No, the point in the book that could make one sit back and worry that maybe they were in fact racist (everyone’s a little bit racist) is when they recognize that some of the concepts presented by the ‘move on with love and letting go,’ Martin Luther King Jr. stand-in Wilbur are ideas which nearly everyone has said at some point with regards to trying to solve racial tensions. Feel better in knowing that what can be agreed upon was probably the sole positive message available in this book; Peace can only be achieved by mutually acknowledging pain and fear, accepting responsibility for our own selves, never letting hate and anger overwhelm love and compassion, and actively working together to fix broken systems, with patience and respect.

Johnny & Jamaal is, throughout it’s entirety, so disturbingly racist, so pettily right wing, so chauvinistic, that even when the character of Wilbur – designed to be the peacemaker, the voice of reason and balance – gives his two speeches, one can’t help but question every paragraph and feel concern anytime they agree. It doesn’t help that even this character is layered with racism, from his quarter African description alluding to his whiteness giving him an intelligent calm “demeanor” and his blackness being evident in his “physicality,” to his saying “pardon my African” when he swears and lines like “minority privilege trumps whatever may be left of White privilege” being part of his speeches, to his creepy, blatant Donald Trump pushing. There is a dead-on, accidental Trump morality substitute in this book represented by the money scheming, narcissistically angry, media manipulating, hate rousing, lie machine Geroy Jenkins, who does very well for himself and convinces most of the populace (those stupid liberals) he’s trying to help his maligned people, and is really a good, sympathetic guy. It must be that the character is African American that makes him unrecognizable to the author. Breakey mentions other political and social leaders, mostly as ineffective or incompetent, for example saying Hillary only has her husbands name to qualify her to an office, and it was as stained as another Bill (Cosby). Any mention of Islam is with clear disgust and the not so subtle insinuation that they are all just waiting to become terrorists, with one Black character even joining Islam because “dey jes’ like us,” and want to “rid da world d’mo’fuckin’ blue-eyed devil.”

In this book ‘truth’ is that every moronic, underhanded thing done by media or organizations are attributed to the Left or the Liberals, with all attempts at reason and justice is for the Right and the conservatives. In this book ‘truth’ is rampant Black-on-White mob violence justified by Blacks playing the victim and liberals covering it up with a ‘poor them’ narrative. In this book ‘truth’ includes every character of African descent speaking in ghetto slang accents, ranging from mild but obvious when they are upper class and highly educated, to nigh indecipherable for the street thugs, which is any poor black person. This book presents a conversation that is desperately relevant, but in such a twisted format, and through such a hostile plot and such awful characters that it is overwhelmingly tainted. The mutual acceptance, active learning, and individual growth that the book lauds as solutions are countered by the overtones, undertones, and the general tone of the book itself.