King James Brings The Land a Crown by Chris Parker 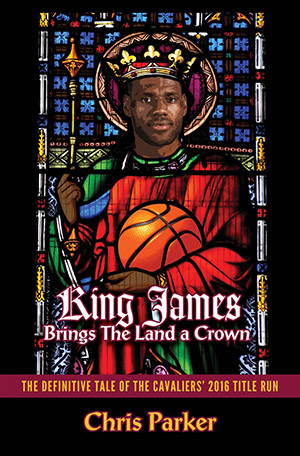 King James Brings The Land a Crown is a nonfiction book about the Cavaliers 2016 run in the Finals. Chris Parker chronicles the team’s journey from the failures of 2015 to the big win of 2016 – each player sometimes struggling with personal injuries and issues. Parker doesn’t just focus on Lebron, though much of the book is about him (sometimes reading a bit like an autobiography that lead up to a win), but about the other players that are on the team; like Kevin Love, Matthew Dellavedova, and Kyrie Irving. The book focuses on the weaknesses of the team, and the strengths, and the chemistry that allowed them to make a comeback.

“‘You guys make me laugh. I swear you guys do,’ said James after the game. ‘My only motivation is how I can be there for my teammates and my coaching staff. That’s it. I mean, at the end of the day, nothing else matters.'”

The book details stats and is sometimes a play by play of the time that lead up to the 2016 win. It’s interesting enough to keep non-sports fans reading, though sometimes the jargon is a little difficult to stumble through – most hardcore basketball fans will find this an easy read. King James brings a lot of humanity to the basketball players themselves, as they struggle with personal weaknesses and difficult upbringings only to overcome and win. The middle of the book provides photos, some from back when Lebron was in high school, but mostly shots of the games played in 2016. Even the cover is pretty cool, painting Lebron in a stained glass window, which brings to mind religious iconography. The book itself is pretty thorough, as told by a reporter who followed the team for two years, so if the casual basketball (or Cavaliers’ fan) wants to pick it up for it’s detailed account, it’s a good “underdog” tale for fans of the game (and the team!).