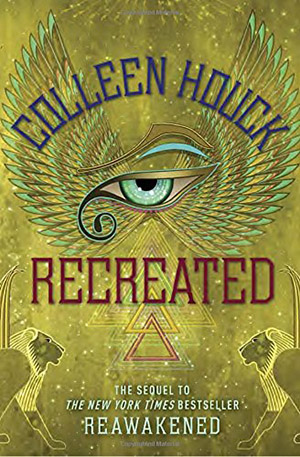 Colleen Houck’s second installment to her best selling Reawakened series, Recreated, adds more character development, mythology, and relationship dynamics, and greatly building upon the first novel. This series follows Lily, a New York City native, who discovers that Amon, an Egyptian Prince that has reawakened from mummification at the Metropolitan Museum of Art needs her help. Even with Amon’s powers, he is in a land and time that is foreign to him and without his canopic jars that contain his life force, he must share Lily’s. This leads Lily to journey to Egypt with Amon to perform a ritual that will allow his two brothers to rise. These Sons of Egypt must rise every thousand years to fulfill their duty and keep the god, Seth, from wreaking chaos. This leads to the second novel which focuses on Lily, who no longer fits in with her proper, successful parents and is upset since Amon’s duty is over, he will rest for another thousand years. However, soon she learns that Amon dismissed his duty and escaped to a dangerous place called the netherworld. She must save Amon from the netherworld and the Devourer, who feeds on lost souls and hearts in order to get strong enough to escape the netherworld and cause destruction. If Amon dies a second death while in the netherworld, the Sons of Egypt will be incomplete and Seth could break free without their protection. In order to save him and the world, Lily will depart on a strenuous journey where she will have to transform herself and her mortality in order to complete her mission and enter the netherworld.

Lily is a character that portrays strength, courage, and sacrifice – major themes of the story. She is well developed through her journey and this is especially showed through learning about her new powers and gaining control over them throughout the novel. As she reflects on her old life, where she merely followed what her parents wanted and didn’t make her own path, to now creating a new destiny for herself in order to help save the world. Her struggle with identity allows her to be relatable to readers trying to understand their motivations and ambitions. Houck does a great job with her development as a sphinx by keeping both the lioness’ and Lily’s personalities unique with their own desires, ambitions, history, and fears. The lioness, Tia, is a humorous addition, especially as Lily teaches her what it means to be human. Houck’s prose flows smoothly between Lily and Tia where they both can stand out on their own and at other times cooperate as one entity.

The development and addition of more mythology enhances the backstory to both the antagonists and protagonists. Seth’s backstory is a great addition while adding to motivation of the other Gods for creating the Sons of Egypt and by explaining Seth’s own ambitions and motive. The twists pertaining to Amon’s brother, Asten, also show the complexity in plot and writing. Each realm Lily enters is descriptive, creating a clear, contrasting image for each part of Lily’s journey and the numerous mythical creatures she encounters. Metaphors and similes develop and connect this new world that Lily is experiencing to memories from her home. These comparisons are also used between the life of Gods to mortal life, greatly adding to one of the themes of immortality and humanity.

While there is development with Lily’s relationships with Amon’s brothers, Tia, and other Gods that drive the story forward, some readers may wish that there was more development and witty interactions between the two main characters, Lily and Amon, similar to the first novel where Amon had a larger role in the story. These relationships encourage and assist Lily through her dangerous journey from the room of riddles to the afterlife and then the netherworld aided throughout by unicorns, fairies, reapers, and haunted by lost souls.

Recreated is recommended for those who enjoy fantasy, character driven narratives, mystery, strong heroines and descriptive world building layered with culture and mythology to create a well-written tale.