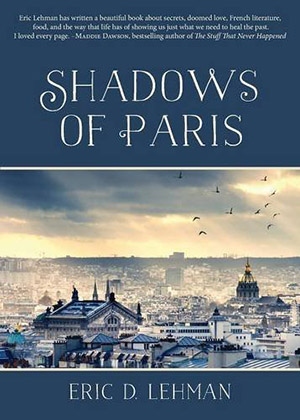 Shadows of Paris, by Eric D. Lehman, is cute; the diminutive physical book, as well as the story. American William Byrnes teaches English in Paris, but another teacher assigns him with reading more French literature starting with Emile Zola’s The Belly of Paris. While he’s purchasing an English transcription at a small bookshop, he meets Mrs. Lucy Navarre, an expat famished for a fellow American. Their friendship’s twists and turns make up most of the novel’s plot.

Readers hungry for the literature discussed within the pages of Shadows of Paris will be unfulfilled. The literary discussions end almost as soon as they begin. The tension is loosely coiled and often unrealistic. All of the French characters are monstrous in one way or another. Lehman leans too heavily on cliché melodrama, such as when he writes within five pages of one another the following phrases: “I never hated him more then at that moment,” “That was the beginning of one of the worst meals of my life, ” and “Nothing mattered anymore, and this cursed city had become my hell.”

However, for Francophiles looking for a pleasant way to pass the time, Shadows of Paris, is sure to do the trick.

“A band of violinists and cellists was warming up underneath the colonnades near Victor Hugo’s house, and I listened to Vivaldi, then Mozart, then something else I had never heard, a rousing folk song that echoed off the brick facades, reaching a terrible crescendo that left the scattered onlookers clapping and hooting.”

It’s short and light enough to finish in one sitting. The overall plot almost mirrors a whimsical French detective novel, and there are clever points. Plus, the story itself is a bittersweet dessert.