The Krampus and the Old, Dark Christmas: Roots and Rebirth of the Folkloric Devil by Al Ridenour 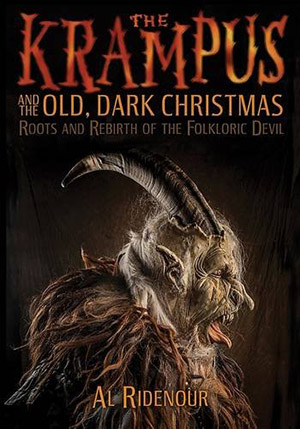 For a long time the Krampus was an unknown to most Americans who typically popularize the Christmas holiday with the safe and familiar jolly, fat, white-bearded man dressed in red who sneaks down chimneys in the middle of the night bearing gifts for good girls and boys. Though thinking back on things, it’s no wonder so many children are photographed screaming while sitting on Santa’s lap. After all, a stranger sneaking down your chimney in the middle of the night – even one with good intentions – is a terrifying prospect. In that sense, it was only a matter of time before we became more acquainted with the Krampus, or as many people see him, the anti-Santa.

The Krampus and the Old, Dark Christmas: Roots and Rebirth of the Folkloric Devil tackles the Krampus mythology, addressing many misconceptions pushed forward by recent books and films (Brom’s Krampus the Yule Lord and the holiday film Krampus of 2015 are cited as primary examples). The book discusses origins, etymology of the word itself, connection to St. Nicholas (not the red-clad, bearded man we typically think of but the Catholic saint), and festivals and traditions around the world to scratch the surface of material contained within. This is basically your one stop shop for diving into the culture and mythos of the Krampus. The book contains plenty of half-page and full-page images, from photographs of recent festivals to copies of ink illustrations from old books. The pictures are fascinating to look at, and compliment the subject matter completely. There is also a color map in the front of the book that contains various towns and landmarks that are discussed within the book and a remarkably involved index in the back, for those looking for specific informational tidbits.

The Krampus and the Old, Dark Christmas: Roots and Rebirth of the Folkloric Devil is a must-have for anyone interested in the Krampus mythology.