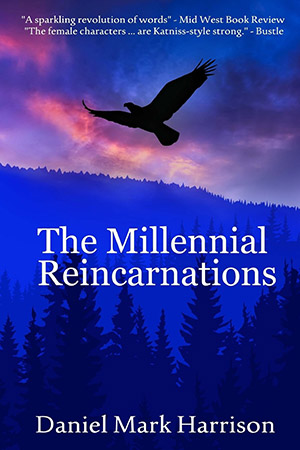 Daniel M. Harrison’s The Millennial Reincarnations follows a cast of characters caught up in keeping face (or maintaining their mianzi) after the Shanghai Sorority Dame was forced to flee China due to blackmail involving a sex tape. Her departure leaves a power vacuum in the sorority and the dramatic changes in the sorority cause some to gain standing, while others lose mianzi – a societal death sentence in communist China. Backdoor dealing, bribes, threats, and more blackmail follow as the various characters scramble for their place.

Unfortunately, this is about as much of the overarching plot of the actual narrative that can be easily gleaned from the story bits readers are given. The new age philosophizing of the book is force fed to the reader through contrived means rather than being allowed to organically develop within the story itself. The story is led into with a preface, a forward, a prologue, followed by an afterword to explain the author’s larger ideas of reincarnation, evolution of thought in the younger generations, and the rapid evolution of technology. There is also a self-insert chapter ¾ of the way through where the author (in the guise of the narrator) has a long sit down chat with one of the book’s characters about what was actually going on in the story.

For the most part the writing mechanics so far as sentence structure and grammar goes were very solid. There were only a few misspellings and typos, which weren’t enough to pull readers out of the book. There are quite a few characters in the book, many of which go by several different names, and sadly all are very two-dimensional. This makes it difficult to emotionally engage with the characters and it is easy to mix them up, which is problematic when you add the parallel timeline/reincarnation ideas. The segments that were the most down-to-earth and easy to follow were actually the scenes involving discussions about business and politics. Daniel M. Harrison is a business journalist, which explains why some of the more detailed segments revolved around business ventures.

Harrison claims that our thinking and striving for more (in terms of intelligence or thought) is being held back by the way our education systems teach science and technology. While it’s true that people learn things in different ways and we shouldn’t be adverse to changing methods that don’t work, he seems to forget that the great leaps and bounds in science in the last few decades and the new ways we consume knowledge is due to the core scientific foundations set down and accomplished by past generations. Any legitimacy Harrison he may have in the argument against traditional science is thrown right back out the window when he states in the afterword that Stephen Hawking died in the 80s and the man we see nowadays is a fraud.

There are plenty of books that deal with the ideas of reincarnation or a human evolution beyond our current level of connectedness and other philosophical ideas in a much more interesting manner; one that doesn’t make readers feel like they are being led by the hand. You only have to look for classic examples such Ulysses, The Magic Mountain, Atlas Shrugged, and the more recent title, Cloud Atlas to name a few. The ideas presented in The Millennial Reincarnations are not new, and are done here in a murky, uninspired fashion that makes it difficult to follow the threads, let alone connect them.