The Possibility of Somewhere by Julia Day 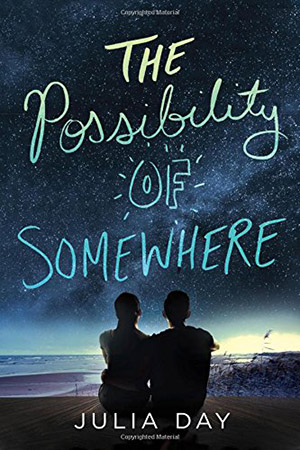 It’s hard being both an overachiever and an outsider, but when set in one’s ways it can take a lot to break the habit. In Julia Day’s The Possibility of Somewhere, Eden Moore is used to being the top student in her class as well as being invisible. Her economic bracket, her family’s history, and some nasty rumors about who she’s dated sets her apart from the crowd. Eden just wants to keep her head down, in hopes of winning a scholarship behind her father’s back and fleeing her small town for good, but when a new girl arrives offering friendship and her academic rival, Ash – who also happens to be a cute boy – starts being nice to her on the same day, Eden realizes that keeping her head down may no longer be an option.

For the most part, The Possibility of Somewhere is a success as a YA novel. It doesn’t read quite as well for adult audiences – Day is unfortunately no John Green or Rainbow Rowell in bridging the age gap of her readers. That said, young adults will certainly enjoy this book. It touches on many topics young readers can relate to: the stress of getting into college, navigating the seas of dating, uncomfortable home life, the awkwardness of budding friendships, and so on. There are facets of the novel that are touching, funny, and sexy, and the story captivates its reader easily. Day is a well-equipped writer who knows what she is doing with her craft.

That said, this book tries to tackle a lot of different topics, and while it succeeds at times, often the story feels a bit, well, crammed. In three hundred pages, Day attempts to tackle racism in small towns, teens growing up in a low class household, classism, autism, bullying, emotionally abusive parents, date rape, the list goes on. While all of these are important topics for young adult readers to experience, as the story progresses each of these plot points tend to either not get the attention they deserve or there is way too much focus placed upon them. There’s a lack of balance at times in the storytelling. Not to mention the bullying Eden receives feels unjustly prejudiced and sometimes might befuddle the reader, and the “female protagonist gets a makeover and everyone realizes how hot she is” trope pops up, which is a real shame as that trope should really be extinct by now. To top it all off, the romance between the two leads is forced and absurdly dull for the first two thirds of the novel. The author hopes to draw parallels between the two with Elizabeth Bennett and Mr. Darcy, but besides the surface similarities, Eden and Ash lack all tension, smolder, and passion.

The Possibility of Somewhere attempts to bequeath different points of views and lifestyles to its readers, and while Day has managed to create a successful first YA novel, it might be a bit too bold in its attempts. Nonetheless, it is a solid book that middle schoolers and high schoolers will most certainly enjoy.