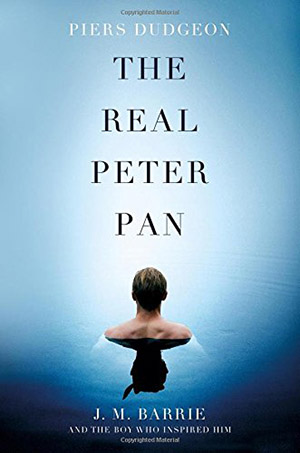 The Real Peter Pan is a sort of group biography, encompassing the lives of J. M. Barrie, the author of Peter Pan, and the five Llewelyn-Davies boys who inspired his work in this and other plays. The focus of the text is from the meeting of Barrie with the older boys and their nanny in Kensington Gardens through the suicide of Michael Llewelyn-Davies, who ultimately became the focus of the majority of Barrie’s intense interest and affection.

Dudgeon, in setting out to document the relationship between the Llewelyn-Davies and Barrie, draws back the curtain on a literary figure that has been much mythologized. Barrie’s fame (and money) protected his reputation in his own day, and the role of Peter Pan as a beloved childhood story has continued to do so. In his foreword, Dudgeon makes the point that even many of the “lives” of Barrie (such as the movie Finding Neverland) have continued to sanitize the story well into the 21st century. Dudgeon doesn’t go overboard in making Barrie an ogre, but he does try to find out the truth of many of the unusual situations that occurred between Barrie and the boys, such as how he became their de facto guardian after the death of their parents. The biography certainly suggests that aspects of the relationship between Barrie and his wards may have crossed emotional lines, and it hints rather strongly that Barrie contributed, if wasn’t the sole cause of Michael’s suicide.

Overall, readers who do not want their romantic image of the Peter Pan story tarnished should likely stick with the play, and avoid this biography. However, readers who are interested in the complexities of the creation of literature will find this biography an interesting read, and those who are familiar with the English literary scene in the early 20th century will find references to many familiar names. Dudgeon does a good job of laying out these complicated social connections and they may cause readers to see other familiar literary figures in a new light.