The Scribe by Matthew Guinn 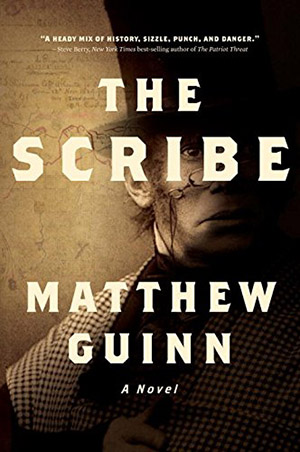 It’s 1881. The International Cotton Exposition is coming to Atlanta. But across the city, leading black entrepreneurs are being brutally murdered, the letter M inscribed on their mutilated bodies. Former Atlanta police officer Thomas Canby, disgraced and relegated to a country post where he can enjoy fine whiskey and a slower pace of life, is brought back to Atlanta to work the case. Partnered up with the force’s first black officer, Cyrus Underwood, Canby searches for the killer and also comes up against The Ring, organizers of the Cotton Exposition and also the men who ran him out of town. Such is the plot of Matthew Guinn’s novel The Scribe.

The novel, while not long, progresses slowly, action and murder notwithstanding. It’s difficult to feel too much for Canby either way, though the brutality visited upon every character about whom Canby cares seems gratuitous and is deeply troubling. The story, however, lacks depth. It plods along and the mystery contains less mysteriousness—and less appeal—than one would expect from a novel with such a perfect setup. The writing is pleasant and it’s clear that Guinn has invested time in researching the world about which he writes, but The Scribe, unfortunately, falls a bit short of its promise.

However, as it’s the second novel in a series, which will most probably contain more installments, there’s still room for improvement, and there’s a definite chance that Guinn will be able to pull his characters and world together in a manner that makes them more multidimensional and sympathetic than is managed in this book.