The Secret Life of Anna Blanc by Jennifer Kincheloe 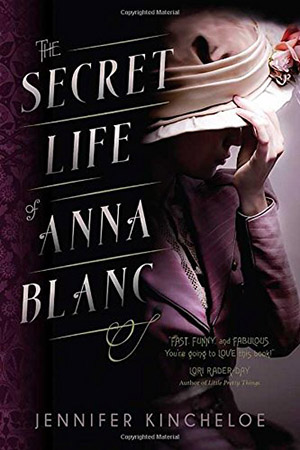 Some people just stumble into their desires. Anna Blanc, the eponymous main character of Jennifer Kincheloe’s novel, The Secret Life of Anna Blanc, is a bored rich girl, afforded all of life’s niceties but chafing under her father’s thumb, stifled by his desires for her life – desires which conflict with her own desires in nearly every way. A thoroughly modern woman stuck in circumstances that limit her (the story takes place in 1907 Los Angeles), she cannot abide by the rules forced upon her, and so she bends them liberally. When, on a fateful shopping trip with her chaperone, Anna sneaks to freedom and inadvertently becomes part of a suffragette parade that will have far-reaching consequences, she finds herself on a path towards her destiny.

Events unfold and Anna, who is betrothed to a serviceman, finds herself sneaking out of the house and, using a pseudonym, getting a job as a police matron. There, she discovers a series of brothel murders and decides that she will utilize her (somewhat unbelievable) proclivity towards just about everything to become an early 20th century female Sherlock, endangering not only her personal relationships but also her life along the way.

Unapologetically spoiled and entitled, Anna has all the charms and abilities of a Phryne Fisher – she’s beautiful, seductive (albeit prudish and susceptible to bouts of “hysteria”) and immediately expert at nearly everything she attempts – but can be an off-putting and not entirely sympathetic character. Her story, and the mystery she solves, is fun and perfect for fans of historical female detective literature.