Waiting for the Cyclone: Stories by Leesa Dean 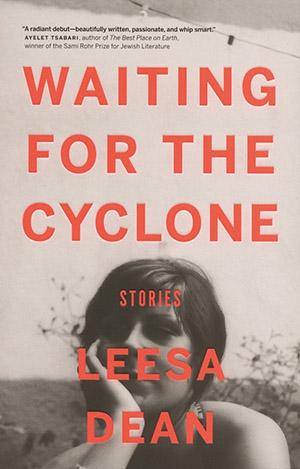 The cyclone in Leesa Dean’s Waiting For The Cyclone is many things. It is a figurative disruption, chaos for its characters, yet it also a way of life. Her collection of thirteen stories picks up its characters on a whim and ends them in places further away, and more isolated then when they began; more hopeless and often more beaten then when they started, yet also in some cases there is no other path for them. Often times Dean’s stories end mid scene, the implication of the cyclone, chaos itself right before our characters. Take for instance “Gone To Seed,” where a young woman, Erika, who is caught in the point of life where her friends are having children and getting married, and she is not. She reconnects with an old love interest, Vic, and agrees to give him a ride to his dentist appointment since he can’t drive due to anesthesia. On a whim she tells the receptionist that she is his wife, and that she is expecting a child.

Vic returns a moment later and catches this back and forth, as the receptionist tells Erika that she’s so lucky to have such a wonderful husband.

It’s the way Dean set ups up her stories and has the reader fill in the unsaid with their own imagination. She does it magnificently, setting up feelings and emotions between the lines. There is isolation and desperation in her words. Her main characters are primarily female, but it would be short sighted to say that was the only focal point. From a feminist perspective it’s wonderful work as we see as Dean goes deeper and gives us the humanity in all people: male, female, young, and old.

Consider her brilliant story, “September,” a haphazard, wayward story of a young girl who journeys from a group home in search of her mother. It’s a story filled with rail lines, canola fields, hobos, and sleeping in cars on the Quebec border. Like all of Dean’s stories it’s filled with life, and there is poetry in its lines, such as the one where people play soccer in a field as our main character sits on the rooftop and drinks beer after spending months searching for her mother. It is really this young girl’s journey, which is the figurative cyclone – a whirlwind of forever searching that we get to experience briefly as readers.

There is also the literal cyclone, a ride on Coney Island, which finds itself in Dean’s opener, the strong and chaotic title story “Waiting For The Cyclone,” about a girl who follows up a craigslist ad in missed connections only to find she was not actually the intended girl. It hardly matters. The plot is a secondary thing. Dean’s stories are to be experienced. Her descriptions and settings are poetic in the finest details – the smell of sugar powdered grease, a man with flipper arms playing drums, and the chaos of the rides always in full motion.

The cyclone is always on the horizon. Especially in her opener, Dean does her best writing in the scenes before – the moments of time where each one of her stories captures that quiet before the coming storm. The way Leesa Dean writes her stories are intimate, plotless pieces of poetry that border on chaos and survival. Sometimes her characters fall in love. Often they’re on the outside looking in. We never know them for long. As readers our role is viewing the eye of the storm, and letting our imagination fill in the chaos.

There is unsaid beauty in Dean’s seemingly harmless set-ups – her quick pace makes every line mean something. Her stories can change direction in a single line and move with the pace of a lost wind. No one plot point described would sound particularly interesting, but her stories feel like real life experiences, and in them there is true learning, true loss, and in reading them one feels as if the moments truly matter. There is a post-college, mid twenties isolation coming through, a world where love is a hopeless thing and everyone is wayward. Some of the characters go parasailing in Turkey, others find themselves in bed with a tattooed stranger who is not their husband. There’s life and beauty in every story. Dean hits her notes perfectly, and brings the coming storm to their world in a beautifully filtered and poetic reality.