A World From Dust: How the Periodic Table Shaped Life by Ben McFarland 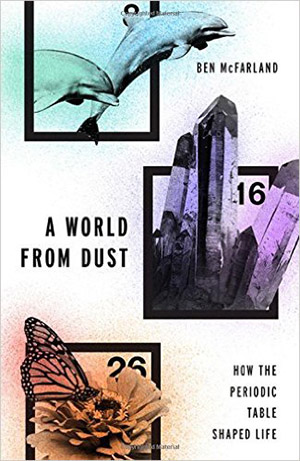 The astronomer and science popularizer Carl Sagan described in his groundbreaking television program Cosmos the fact that much of the matter in the universe, including the atoms that make up humans, was birthed in the fiery furnaces of stars millions and billions of years ago. “We’re made of star-stuff,” he said; and ever since, since-minded persons have adopted this notion of “star stuff” origins as meaningful in a sort of spiritual way.

In the new book A World From Dust, Seattle-based chemist Ben McFarland extends such chemical origins into a look at how chemistry further determined the evolution of the world – its geology, environments, and life. He begins his “natural history told by a chemist” by setting out five of his prior convictions that shaped his narrative. One of these is his personal faith, which while important to him, he shares, “is ambiguous on the question of the nature of history.” After being reassured, as many a reader might go into this book wanting to be, that this science book from a professor at a religious university will stick to the science, McFarland delves into his billions of years journey into the role played by elements in creating the world we live in. A World From Dust is a detailed and engaging read that should give its readers a new appreciation for humanity’s connection to the rest of the natural world.