An Atheist and a Christian Walk into a Bar: Talking about God, the Universe, and Everything by Randal Rauser and Justin Schieber 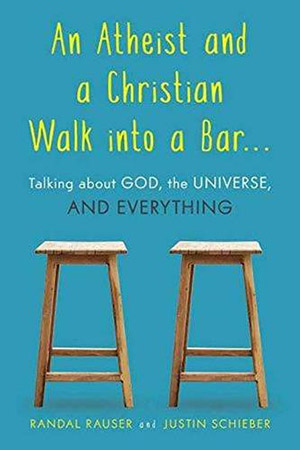 This book has a great title, promising a lighthearted, convivial discussion. …Light headed, might be a better estimation.

This is Randal Rauser’s tenth book and the third one with a coauthor. This reviewer has previously reviewed God or Godless by Randal and John W Loftus. That one was styled as a debate between a believer and an Atheist, with opening statement, rebuttal, and closing arguments. This book uses a conversational format, which may be less formal, but also leads to a less rigorous treatment of the subject matter.

The discussion starts with why God matters and moves on to the problem of massive theological disagreement, the problem of the hostility of the universe and God, mathematics, and reason. There’s more, but these subjects illustrate the scope and type of discussions going on.

The discussions are philosophical in nature and so are not anchored to evidence, be it scripture or some scientific ‘proof.’ As a result, they are mostly assertions by analogy, constructed example and free range fancy.

At first, I thought we might be faced with a Hannity & Colmes situation, where one participant overpowers the other with superior knowledge, better debating skills, or just extra determination. On reflection, I think it’s because Randal, as a religion professor is immersed in his subject matter, while an atheist has to keep his day job and so may be not quite so facile with his presentation. This impression largely disappears later on when they both go to the mountain, where the ideas are thinner.

I did learn some new words, though. The first, Aseity, means “that which exists of by and for itself, without antecedents, etc.” A neat, though not very plausible, or fair, end-around the infinite regression problem. The second. Fideism, says that faith need not depend on evidence. Kind of like one of my favorite bumper stickers: God said it, I believe it, That settles it! If only it were that simple. A third is Apatheism, the dismissing of the whole question of whether the idea of God even matters in this world.

If you haven’t figured it out yet, this reviewer is an Atheist. The whole book is intended to encourage a lively discussion of the question of God’s existence, which I agree is important to the world we live in. However, after reading An Atheist and a Christian Walk into a Bar, I think apatheism is my fallback position. …At least for a while.