Arabella of Mars (The Adventures of Arabella Ashby) by David D. Levine 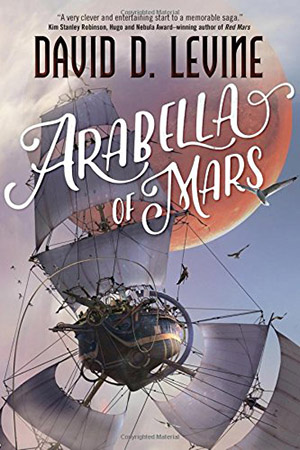 In the early 1800s, an English colony on Mars is home to sixteen-year-old Arabella Ashby. After failing yet again to follow proper customs for a young English lady, her mother uproots her and her sisters to England. Following the sudden death of her father, her brother, Michael, assumes responsibility of the family’s plantation on Mars. Arabella’s cousin, Simon, uses this opening to travel to Mars with the intention of murdering Michael and acquiring control of the family’s fortune. Arabella soon becomes embroiled in a series of fantastical and perilous events aboard a flying ship destined for Mars. She must learn to sail, conceal her sex from fellow crewmembers, and belay mutiny if she has any chance of reaching Mars in time to save her brother.

An initial suspension of belief is required in order to truly immerse oneself in the story. For example, within this world, interplanetary travel is achieved by flying through space in ships powered by coal and Venetian silk. The author deftly integrates explanations of other unfamiliar narratives from insight into Martian culture and customs to a detailed breakdown of using automatons for navigation. The world is further elevated by compelling characters, particularly our protagonist, Arabella, who morphs into a Katniss Everdeen type heroine, willing to do whatever it takes to protect the people and planet she loves.

While the fusion of Mars, flying ships, and 1800s England with a hint of steam punk and feminism might seem strange at first, it works well in this context. The plot builds to a successful climax while establishing plot points that will presumably come to fruition in the sequels to Arabella of Mars. Though Arabella becomes an impressive heroine by the end of the novel, the ending leaves her room to grow further in future installations. Overall, a satisfying start to what promises to be the first in a series of thrilling adventures.