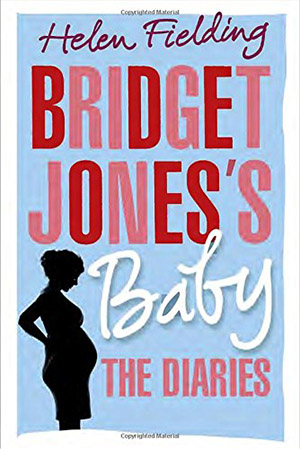 Bridget Jones’s Baby is the fourth installment of Helen Fielding’s series chronicling Bridget Jones’s chaotic and humorous singleton lifestyle. Elements of the novel parallel Bridget Jones’s Diary, primarily Bridget’s indecision over which romantic partner she is better suited for; though in either circumstance it is evident to readers who she will ultimately end up with. The main difference is that here she is pregnant and the outcome of her decisions have a significance and permanence that was not previously present.

Bridget Jones’s Baby maintains the humor of its predecessors without relying heavily on previous plot points. Similarly to the earlier books, the novel incorporates relevant societal commentary in an amusing rather than offensive format. For example, Bridget’s struggle to remain significant at a company that continuously skews younger in addition to her perpetual attempt at balancing her single and married friends is both relatable and insightful. Readers of the previous novels will revel in familiar cameos in addition to the introduction of a few new colorful characters.

If you read and enjoyed the previous books, you will most likely enjoy this one. If you are looking for a light, humorous read, this book is for you. For those trying to decide whether they should read the book as a complement to the movie, there are only minor differences, the most significant being the replacement of Daniel Cleaver with Patrick Dempsey’s character. Overall, this book wasn’t entirely necessary. It is shorter and feels uninspired in comparison to its predecessors. Additionally, the format doesn’t quite work. We’re led to believe that the story is being told for Bridget’s son’s benefit. If that were the case, one would assume that Bridget would filter out some of the more revealing or inappropriate moments. Nonetheless, it is refreshing to read an account of a woman who isn’t perfect and isn’t expected to be. While Bridget’s naiveté and irresponsibility may be frustrating at times, especially considering the fact that she’s no longer caring for just herself, it is realistic that a person doesn’t suddenly become a perfect parent overnight. It is ultimately through these imperfections that readers can empathize with, learn from, and laugh alongside Bridget Jones once more.