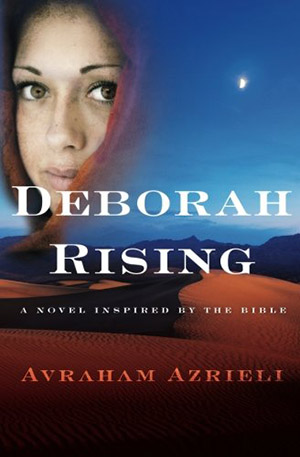 One brief chapter in the biblical book of Judges speaks of the only woman to act as a Judge in Israel. That woman’s name is Deborah. Avraham Azrieli’s novel Deborah Rising transports the reader to the life of the young Deborah. With his book, he explores one interpretation for how a girl of her tribes and time could rise to the station of prophet and judge.

The story begins with the stoning of Deborah’s older sister, barely grown to womanhood, for the crime of not being a virgin on her wedding night. Her sister charges the village priest to protect Deborah, declaring a curse on him if he does not. Before her sister’s body is cold, her husband grabs Deborah’s hand and places the betrothal ring on her finger. Deborah is appalled and frightened. Her betrothed, her sister’s widower, has declared his hatred of the unattractiveness of her pale eyes, freckled skin and red hair, which is identical to her sister’s. The life of a girl in Israel is not fully her own.

From this point, the young Deborah seeks a way to change her fate. Although her faith in her God is strong, she does not challenge or disdain the gods others believe in. The story is filled with challenges, expected and unexpected twists, and a variety of characters that help or hinder her.

Azrieli’s research is evident in his descriptions of the area and the relationships of the priests, village leaders, women, rival tribes, and strangers. Although it is essentially a religion-based story, Deborah Rising does not overpower the reader with religious philosophy. Instead, it uses religion as the backdrop for a girl struggling for the opportunity of self-determination. It is well written, with multifaceted characters and a refreshing new way to view a biblical story. In all, Deborah Rising is an enjoyable and novel approach to the biblical story of Deborah.