Faller by Will McIntosh 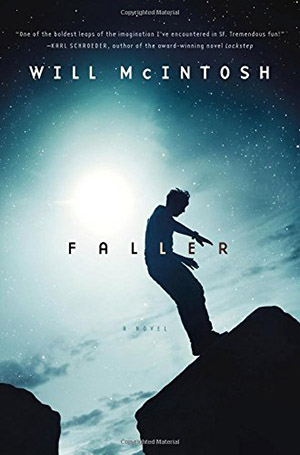 Faller woke up in the middle of the street with no memory of who he was and finding everyone nearby in a similar state, with the sense that the world had gone horribly wrong. All he had on him was a picture of himself and a smiling woman, a plastic army man with a parachute, and a picture hastily drawn in his own fresh blood. Armed with the idea that he had tried to leave himself clues moments before the catastrophe had ripped apart the world, faller is determined to find the woman in the picture. First, he has to figure out how to fall.

Will McIntosh’s Faller is a captivating and surreal science fiction romp. Split between Faller’s current adventures and the events leading up to the catastrophe, McIntosh writes in a way that lets the reader put things together rather than leading them by the nose. There isn’t a whole lot of time on character building, since the book is largely driven by its setting, but the characters are fascinating even when they aren’t likable. Many of their decisions are survival focused, and often times the characters are trapped into making the best out of several bad choices.

This is an apocalyptic book that is completely refreshing for those who may have started to become a bit jaded by the genre (no zombies!). Science fiction readers looking for something a bit strange with a touch of the terror of “what if” will find Faller to be right up their alley.