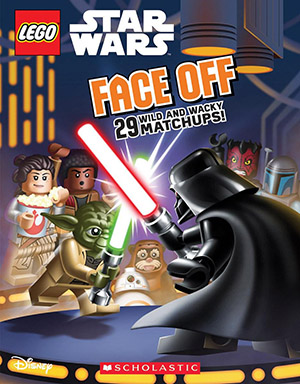 Face Off (LEGO Star Wars) is a great guide for Star Wars fans, young and old. The book features matchups between 29 LEGO Star Wars characters and readers can decide who would win the battle by checking out the stats and facts about each character. Will Han Solo beat Jango Fett? Han Solo uses a modified blaster pistol while Jango Fett favors a wider variety of weapons – blaster pistols, rocker launcher, flamethrower, rocket darts, and snare. He can also clone himself so it’s up to readers to decide if the crafty Solo can defeat the heavily armed bounty hunter! Other fun showdowns include Poe Dameron vs. Savage Opress, Lando Calrissian vs. Emperor Palpatine, Finn vs. Darth Malgus, Anakin’s Jedi Starfighter vs. Kylo Ren’s Command Shuttle, Admiral Ackbar vs. Bib Fortuna, and Leia vs. Greedo. Full-color illustrations are on each page and the final pages of the book reveal the experts’ selection for which character would win each duel. Readers will enjoy deciding for themselves the winner of each hilarious matchup, and they’ll appreciate the selection of popular characters as well as lesser-known warriors. A fun choice for Star Wars and LEGO fans.