Licking Flames: Tales of a Half-Assed Hussy by Diana Kirk 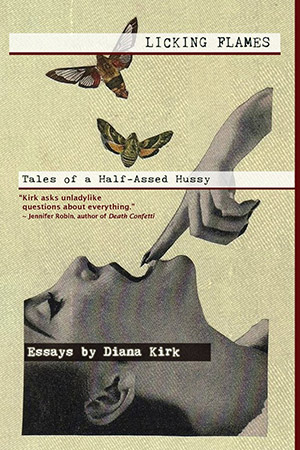 First off – If you are remotely offended by slightly crass or off-color words or topics that used to only be found late at night on Showtime or nowhere, don’t read this book. I was a willing yet initially unknowing participant. Her collection of essays is not something I would seek out but I found myself drawn in despite delightfully vulgar, yet real stories, that you could probably find at least one that runs parallel in your universe. Now I would read them with my real friends and a tumbler or two of neat whisky. Not all of the essays are ‘durdy,’ you will be surprised. Besides, some of the words or topics she uses are no worse that what we have heard coming from the mouths of babes (by babes I mean baby hands) on primetime (#sniffle).

Diana Kirk is a local Northwest author who exudes personality, honesty and confidence in her self and the many roles she performs. I took a little time to research her, by that I mean Googled and Facebooked, and would add intelligent, curious, and authentic to her voice. According to an October 11 Facebook post, a publisher panel (rumor has it mostly male) rejected this book for being “too crude, too aggressive.” They speak the truth, but maybe aren’t ready to handle it. Rather than paint a Pinterest perfect picture of life events like marriage, home births, green smoothies, adoption, death, moon time, and dating, she shares her raw unfiltered story with bite, yet layers of compassion and vulnerability of life in the Pacific Northwest and around the world. Licking Flames is like taking a swig of good unpasteurized apple cider vinegar.

Last warning, some of her stories might be triggers, just flip past the ones that don’t suit you and come back later. I returned a few times to finish, flipping forward and back, laughing, cringing, and wondering what I would have done.

“But who am I to judge other people’s journeys?” – Diana Kirk, Licking Flames.