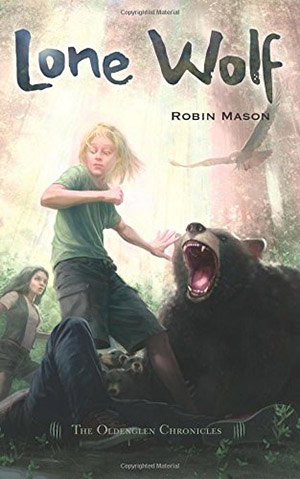 After an amazing summer in his new home near the forest of Oldenglen, Jackson, or Jax, Wolfe is at his new school. He’s been getting along with most everyone except for a boy named Noah and his gang of boys. Noah takes an immediate dislike to Jax and quickly decides to be his enemy. Trying his best to avoid the situation, Jax ends up in a no-win situation during which the wolf in him peeks through. Now, Noah is more determined than ever to take Jax down and begins a stakeout of the forest with his friends, putting not only Jax but also the entire glen in danger. Jax and his friend Sarah must rally the forest animals to safely get rid of the bullies before the secret of Oldenglen is discovered or someone gets seriously hurt.

Lone Wolf is the second novel in The Oldenglen Chronicles by author Robin Mason. Jax has grown from the first book and comes across as more mature and self-assured from the first chapter. He is trying to learn more about wolves and is more in tune with the animals from the glen and elsewhere as well. He is also learning about some drawbacks from his wolf side in that his wolf will start coming out if he becomes upset or angry. While this is fine when Jax is in the forest, it’s not so helpful when he’s in front of a schoolmate. The book follows Jax as he makes conscious choices to try to avoid fighting and to try to save everyone he can, including his enemies. The supporting cast of characters from the first book are back in play with a few additions including bats, who are surprisingly delightful in their part of the story. Jax’s friend Sarah also returns and while she has one very memorable scene, her story is not the focus of this book. The novel picks up shortly after the original book, Oldenglen leaves off so reading the books out of order is not recommended. As with the first book, Lone Wolf is a fun romp into the woods of Oregon. It has a nice mixture of real-world problems and fantasy elements. Young fans of fantasy will enjoy this latest edition to The Oldenglen Chronicles.